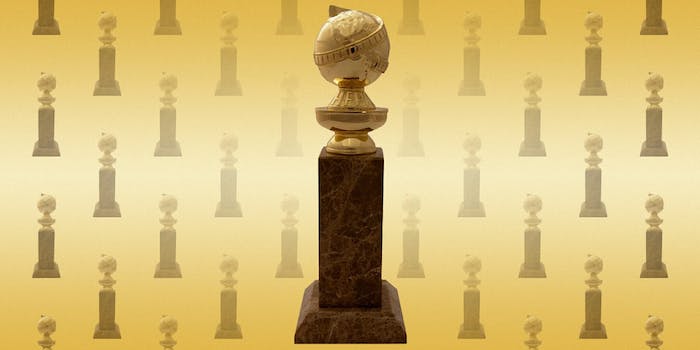 Streaming services made for 25 percent of the TV nominations.

The 2016 Golden Globes nominations have been announced, with yet another strong showing from streaming services like Netflix, Amazon Studios, Hulu, and a film originally funded by Kickstarter.

Projects from these services count for 16 of the nominations this year; 14 of those nominations come from the TV categories, which now make up approximately 25 percent of the TV categories. If there was ever any doubt from critics, online content isn’t going away from awards season anytime soon.

Netflix tops the streaming competition with eight nominations spanning six TV shows and the first nomination for its first feature film, Beasts of No Nation, which went to Idris Elba for Best Supporting Actor. Orange Is the New Black and Narcos were both nominated for Best Comedy and Best Drama, respectively, while Uzo Aduba (OITNB) and Robin Wright (House of Cards) are nominated again. New nominees include Grace and Frankie’s Lily Tomlin, Aziz Ansari (Master of None), Wagner Moura (Narcos), and Ben Mendelsohn (Bloodline). For the first time, House of Cards and actor Kevin Spacey were shut out of their respective drama categories.

Amazon Studios found its awards stride with last year’s Golden Globe Best Comedy winner Transparent, which is about to air its second season and grabbed three nominations for Best Comedy. Jeffrey Tambor (who won the award last year and the Emmy in September) was nominated for Best Actor, and Judith Light for Best Supporting Actress. But this year it also has a chance for gold with Mozart in the Jungle, which is competing against Transparent for Best Comedy and star Gael García Bernal is going head-to-head with Tambor for Best Actor.

Hulu received its first nomination for Casual, which will be among the shows nominated for Best Comedy.

On the film side, Charlie Kaufman’s Anomalisa is nominated alongside two Pixar films (Inside Out and The Good Dinosaur), Shaun the Sheep Movie, and The Peanuts Movie. And while it was distributed through traditional means—Paramount Pictures and Starburns Industries—it started out as a Kickstarter campaign that raised $406,237 from 5,770 backers more than three years ago.

You can view the rest of the nominations on the Golden Globes website. The winners will be announced Jan. 10 on NBC.