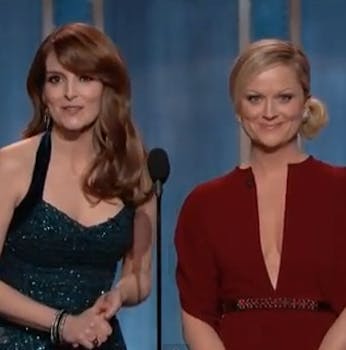 Tinseltown brought out not only the stars for the Golden Globes, but the wittiest tweeting this side of the election.

Tinseltown brought out not only the stars for the Golden Globes, but the wittiest tweeting this side of the election.

Your snark, jubilation, and weirded-out comments about Jodie Foster’s speech were just a fraction of the 3.6 million Globes tweets during the ceremony, and 4.2 million tweets over the course of Sunday.

Jennifer Lawrence’s win for Best Actress in a Comedy or Musical for Silver Linings Playbook—she beat Meryl!—saw the biggest peak in tweets during the night, topping out at 19,886 tweets per minute.

Anne Hathaway was a close runner-up, with 19,695 tweets per minute as she took home the prize for Best Supporting Actress in a Comedy or Musical. Russell Crowe’s tweet about it took an unusual turn.

A surprise appearance by former president Bill Clinton to introduce clips of Lincoln not only got Lena Dunham really excited, but sent Twitter aflutter—with 18,290 tweets per minute.

Chatter about the evening’s exceptionally funny hosts, Amy Poehler and Tina Fey, hit peaks during their opening speech (their respective burns of James Cameron (10,446 tweets) and James Franco (1,680) were among the top-tweeted moments, according to Topsy), and again later in the night as they lamented their loss to Dunham in the Best Actress in a TV Musical or Comedy category.