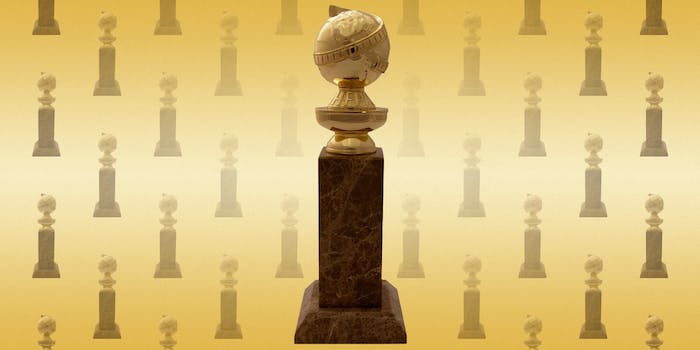 Here’s your film predictions for the 2017 Golden Globes

Who will win... and who actually should.

Tonight Jimmy Fallon will host the Golden Globes, aka the awards show you actually like. The talk show host has big shoes to fill after the departure of Amy Poehler and Tina Fey, who redefined what was once an industry joke.

The Globes are still the Drunk Uncle of awards season, where Meryl Streep slurs the names of her fellow nominees after too many glasses of wine, but its voters have proven themselves increasingly savvy in recent years. While the Academy Awards have been plagued by #OscarsSoWhite, the Hollywood Foreign Press Association has offered up yet another crop of astute and eclectic picks in both movies and television. If you want to ace this year’s ballot, here are your best bets on the films side (along with who we’d like to see take home the award).

You can catch the show on NBC at 8pm ET/7pm CT.

Moonlight is the year’s best American film, a remarkable tour-de-force that reminds us of the universal power of cinema. Directed by Barry Jenkins, this queer coming-of-age story has been a critical juggernaut, earning a 99 on Metacritic en route to awards from the American Film Institute and Los Angeles Film Critics Association. In a perfect world, Moonlight would also sweep the Globes, but it’s likely to go home empty-handed at the idiosyncratic show.

Will win: Manchester by the Sea

That’s because Manchester by the Sea will probably play better to the Hollywood Foreign Press Association. While Moonlight derives its power from small moments of observation, Manchester goes big, one of the most devastating experiences you’ll ever have in a theater. Kenneth Lonergan’s movie about how grief shapes our lives features stellar performances from its cast, particularly HFPA favorite Michelle Williams in a small role. The film is more than worthy of top honors here.

Best actress in a drama

To say that Isabelle Huppert is overdue for awards recognition is the understatement of the year. Boasting a distinguished 45-year career, the French icon is among the finest actresses in the world. Her work in films like The Piano Teacher and Amour is simply incomparable. Elle may be her finest achievement yet. Huppert plays Michele, a video game designer who is sexually assaulted in her home. The film goes places that are both surprising and shocking, a high-wire act unlike anything you’ve ever seen.

This is a ridiculously stacked category. In another year, Amy Adams would win for giving not one but two layered, gripping performances in Nocturnal Animals and Arrival (she’s nominated for the latter). But Natalie Portman turns in an accomplished, prestige-friendly performance in Jackie, playing in the grieving first lady in the days after Kennedy’s assassination. The film is designed to win awards like this one, and Portman is simply too good to pass up.

Best actor in a drama

It’s been a long time since Denzel Washington has had a film role deserving of his titanic talents, and he nails it. Washington, who pulled double-duty in directing this adaptation of August Wilson’s Pulitzer Prize-winning play, is volcanically good, dominating every scene he’s in. His Troy Maxson is a singularly great tragic character, a father who wants what’s best for his son (Jovan Adepo) even if it means destroying the boy’s life in the process.

Will win: Casey Affleck, Manchester by the Sea

The Golden Globes will be an interesting test for Casey Affleck. Ben’s younger brother has been at the center of controversy over a sexual harassment case he settled after I’m Still Here, which the actor directed. Two women alleged aggressive sexual misconduct from Affleck on the set of the Joaquin Phoenix rap mockumentary, which was settled out of court. Similar wrongdoing tanked Nate Parker’s awards chances, the actor who directed, wrote, and starred in The Birth of a Nation. But I predict that Affleck—who gives his career-best work here—will remain undinged, for better or worse.

La La Land is one of the year’s most enjoyable entertainments, a delightful trifle of a movie that recalls the Golden Age of Musicals. Damien Chazelle, who previously directed Whiplash, has claimed his favorite film is The Umbrellas of Cherbourg, and his influences show. The emotions are big, but the music is disarmingly lo-fi, as was the case in Jacques Remy’s candy-colored tragedy. Many complain that the songs aren’t memorable, but they help convey a certain mood, the ecstasy of falling in love and the heartache of what could have been.

The question remains, however: Will the backlash kill La La Land? Critics have taken the movie to task for the extremely clumsy way it handles race. This is a movie in which Ryan Gosling, a white man, plays a well-dressed curmudgeon who will save jazz from John Legend. In a small role, the pop singer plays a bandleader who believes that in order to survive, all art must evolve. Many have pointed out that it’s extremely problematic to tell black people how to play a musical genre they invented. But La La Land, which is quite lovely despite its glaring flaws, is simply unstoppable at this point.

Should win: Hailee Steinfeld, The Edge of Seventeen

This category was full of surprises, but none was more welcome than the love thrown at The Edge of Seventeen, an egregiously overlooked gem that’s destined to become a cult classic. The teen comedy is the best movie John Hughes never made, in which Nadine (Hailee Steinfeld) struggles to come to terms with the death of her father. This truly wonderful film is anchored by a star-is-born turn from its 20-year-old lead, giving a ferociously witty and self-assured performance.

Emma Stone will win the Oscar for best actress this year, and the Globes are really just a pit stop for the young starlet. Between Easy A, Birdman, and The Amazing Spider-Man, Stone has continually proven her astounding versatility, someone who can do just about anything (except, well, play Asian). La La Land is further proof of her immense gifts. She’s simply divine as, Mia, a struggling actress looking for her big break, and if you weren’t already in love with Ms. Stone, you’ll swoon for her.

Don’t underestimate Ryan Reynolds. The 40-year-old was recently crowned Entertainer of the Year by Entertainment Weekly for his career re-launching role in Deadpool, a megahit that grossed more than $780 million worldwide. Reynolds spent nearly a decade trying to get the movie made, and his passion shows. He’s superb as a smart-alecky superhero in a film that upends the conventions of the genre. Just as America was suffering from Marvel fatigue, Deadpool came to the rescue.

Ryan Gosling is good enough in La La Land, but it’s really Stone that does most of the heavy lifting. Gosling, who is known for playing muted characters, largely coasts on his co-star’s charm. Nonetheless, an award for La La Land will likely serve as overdue recognition for better performances in films like Lars and the Real Girl, Half Nelson, and Drive. Florence Foster Jenkins’s Hugh Grant might upset, delightful as the long-suffering husband of the world’s opera singer. But it’s Gosling’s award to lose.

If Viola Davis doesn’t win a Golden Globe this year, they should just cancel the show. In Fences, Davis offers a master class in restraint. Playing a woman dealing with her husband’s infidelity, the actress holds all the pain and agony her character is feeling inside until a pivotal confrontation, when long-buried secrets finally spill over. That scene is some of the most powerful acting you’ll ever see in a movie. The audience in my theater burst out into applause, and Davis is likely to hear those kudos on Sunday night.

Davis has almost no competition in this category, but it’s worth mentioning what a great year this was for black actresses at the Golden Globes. The 51-year-old shares the category with Moonlight breakout Naomie Harris and Hidden Figures’ Octavia Spencer, returning to the category after her 2012 win for The Help. Here’s hoping both actresses repeat their bids when Oscar nominations are called later this month.

Mahershala Ali had one hell of a year in 2016. He was nominated for at the Screen Actors Guild and Critics Choice Awards for his performance in Netflix’s House of Cards, while also appeared in the streaming platform’s Luke Cage. Ali also starred in Hidden Figures, The Free State of Jones, and Moonlight, the latter of which is likely to earn him an Oscar. The 42-year-old actor is mesmerizing as Juan, a mob boss who takes a young Chiron (Alex R. Hibbert) under his wing. Ali is the embodiment of love and empathy, a father figure who shows the boy how to be a man.

One thing to remember about the Golden Globes: They love big names. It’s why they opted for Jessica Chastain, who gained little awards traction for the gun control message movie Miss Sloane, over Ruth Negga’s haunting, subtle work in Loving. Although Ali is the favorite here, he’s still largely an unknown in the industry. That tendency may lead to an upset win for Jeff Bridges, who gives a crowd-pleasing performance as a wise-cracking sheriff in David Mackenzie’s Hell or High Water.