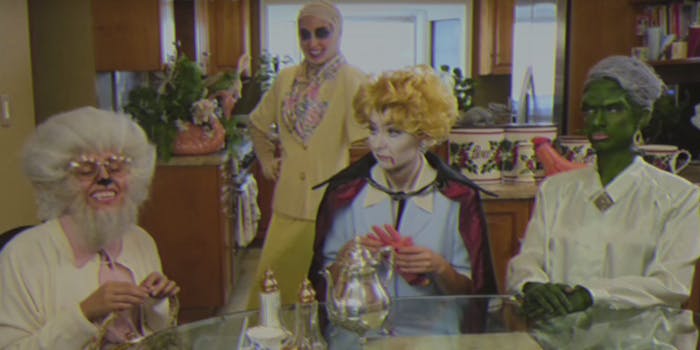 Which Golden Ghoul are you?

The ladies of YouTube channel Creature have assembled a ghastly Golden Girls parody for their latest video—complete with those fake “Halloween” names in the opening credits—for a look at Sophia, Rose, Blanche, and Dorothy in the costumes that match their personalities. They’re all pretty spot-on, but c’mon, Sophia is still the best.

Charley Feldman, the parody’s writer, also plays the part of Estelle “Wolf Man” Getty, aka Sophia. Creature, she says, strives to be a “hub for female-produced comedy and geekery,” and this fiendish homage to a show about female friendship is also a testament to its influence.

“I can’t speak for the greater Internet, but we know as women trying to break into the comedy world at large, we have always seen The Golden Girls as an example that this dream is possible,” Feldman said. “Not only right now when people say you have to strike because you’re young, but at any age. Women are funny. Their lives are rich with story and worth exploring. Sure, Netflix has Jane Fonda and Lily Tomlin, but the general landscape isn’t kind to female comedians past their ‘last fuckable day.’ The Golden Girls is proof that that cliche is ridiculous, and that was in the late ’80s/early ’90s! It’s almost as if the show shouldn’t have existed, but it did, and modern TV needs to learn from it because it clearly holds up and people still love it! Partially for those reasons, and also because it’s just so damn good and relatable.”