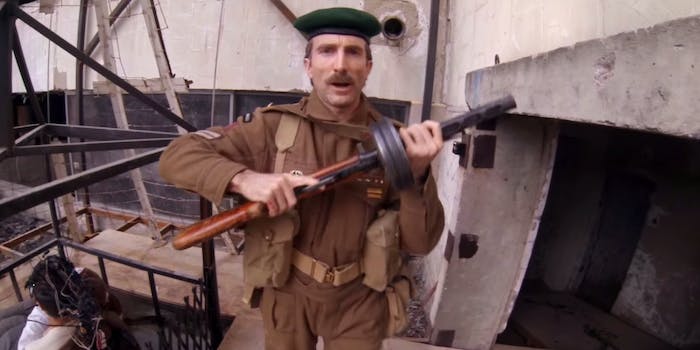 Now you can see the world through cyborg eyes.

Biting Elbows isn’t exactly a household name, but if you’re into a certain kind of video game, you’ve probably seen the band’s video for “Bad Motherfucker.” It’s a live-action version of a first-person shooter, and is something like a cross between Call of Duty, a GoPro parkour video, and a Jason Statham movie.

Director and Biting Elbows frontman Ilya Naishuller is now making a feature-length movie in the same style, starring Elysium and District 9 actor Sharlto Copley. This film is titled Hardcore, and according to Naishuller’s Indiegogo page, it will be the first action movie to be shot from a first-person point of view. In other words, the audience will experience all the stunts and action sequences from the perspective of the main character. The poorly received Doom movie tried this for a few minutes without much success, but Naishuller’s music videos suggest Hardcore might actually work as a full-length film.

Hardcore may only appeal to fans of violent action movies like Crank, but that’s still a pretty big audience. The story is simple: A newly awakened cyborg has to save his wife (the scientist who created him) from an evil guy with telekinetic powers. It’s the filming technique that will really sell it, and Naishuller’s sample video will help you judge for yourself whether it’s worthwhile.

The film was shot almost entirely using GoPro cameras, worn by a stuntman playing the lead cyborg character, Henry. Everything has been shot and edited already, with this Indiegogo campaign funding the post-production costs for things like CGI and color correction. If they reach $250,000 by early December (and it looks like they probably will), Hardcore is due to hit theaters in 2015.