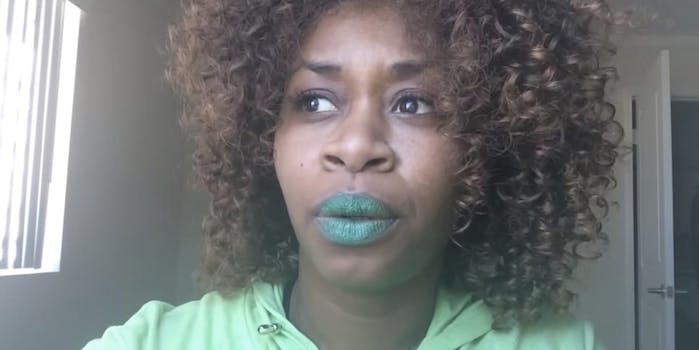 First she sits down with Obama, now this.

The Collective Digital Studio has recently made some significant additions to its roster of creative partners, and for its most recent deal, it has gone green. The media company that runs a multi-channel network on YouTube has signed vlogger and comedian GloZell Green as its newest partner.

GloZell’s channel, which features her rants, reviews, attempts at challenges, and her many other musings on life, has more than 3.4 million subscribers and has scored nearly 600 million views. In January 2015, she received her biggest assignment yet when she landed an interview with President Obama. During the event, her signature ridiculous style was on full display, and she drew plenty of comments from traditional media outlets.

By partnering with CDS, GloZell will join a network that already includes many of the most popular channels on YouTube. In February, it signed seven new creative partners, including prankster Yousef “fouseyTUBE” Erakat and musician Jon “Paint” Cozart. A few weeks after that announcement, beauty and style influencer Meredith Foster joined the network as well.

CDS has been well known for its ability to secure film and TV opportunities for its partners, and that is a potential goal for the network’s partnership with GloZell. The 52-year-old YouTube star recently landed a role in The Wedding Ringer, a major motion picture starring Kevin Hart. “GloZell’s vivacious personality has mass appeal and has led to her building a strong audience and fan base,” said Dan Weinstein, CDS President, in a release. “We look forward to showcasing her unique and fearless sense of humor to even bigger audiences with new and original content.”

In total, CDS’s 900-plus partner channels score more than a billion total views each month.