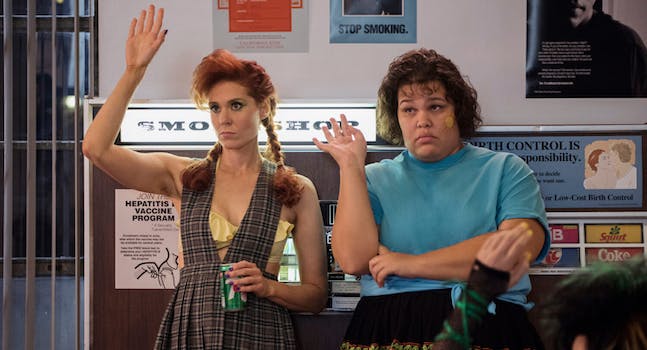 The breakout star is back for season 2.

In Britney Young’s first audition after season 1 of GLOW aired on Netflix, there were no listed physical requirements for the role she was seeking. The project was looking simply for a character who was bubbly and nerdy. You could be tall or short, thin or thick, or Black or white, and it didn’t matter.

When Young arrived at the audition, she ran into a female friend who’s 5-foot-3 and white, maybe a size 4. Young, who plays Carmen “Machu Picchu” Wade on Netflix’s smash hit pro wrestling comedy, is closer to 5’9”, and she’s biracial. She walked into the audition’s waiting room, and she saw actresses of all sizes and shapes. They were all going for the same role.

Months after that moment, Young still is flabbergasted and inspired by what she saw.

“I told my friend, ‘You have no idea how much it means for you and me to be going up for the same role,’” Young told the Daily Dot. “I mean, it really hit me.”

Young is proudly plus-sized, and she’s thought extensively about how to make her way through Hollywood. She’s thought about Michael B. Jordan instructing his agents not to send him scripts written exclusively for Black men and she’s pondered how thin, white actors don’t usually have to worry about the physical requirements posted for auditions. That is not Young’s experience when she’s deciding on a possible new role.

“It always says ‘overweight’ or ‘heavy,’” she said. “They’re great describing words, but is it important to the character?”

On GLOW, the character was important too. It tells the tale of the 1980s wrestling TV show Gorgeous Ladies of Wrestling that introduced the world to a bevy of athletic female stars with cartoonish gimmicks and returns to Netflix for its second season in July. As Young’s character wrestles with her co-stars, she is wrestling with the entertainment industry as a whole.

The show’s first season drew rave reviews, in part because it was so female empowering and because it has a wonderful ensemble of actresses (it was also co-created and is executive produced by women). In the age of the Me Too movement, an idea like GLOW also shows how Hollywood could move forward into a new era of entertainment.

Season 2 was filmed during the last three months of 2017. The Harvey Weinstein news that the longtime producer was a serial abuser began filtering into the mainstream in early October, and the women on set spent much of their time discussing the movement and sharing personal stories.

“We talk a lot about the variety of our show—women of different races and body types,” Young said. “We’re very age-inclusive on the show. We have girls who are in their 40s, but it’s more who they are as characters and what they bring to this team. The thing I love about GLOW is that we’re not only telling stories about women, we’re telling stories about humans. We do bring up some of the things addressed by Me Too, but we didn’t bring them up because of the Me Too movement. We’re just bringing up issues that actually pertain to women.”

Young’s character, Carmen, was one of the most interesting of the entire first season with one of the most tear-jerking story arc conclusions of the series. Her father on the show, Goliath Jackson, is a huge wrestling star, and he strongly disapproves of Carmen learning his trade. By the season finale, Carmen—who had to overcome her fear of performing in the ring—dramatically receives his approval while she works a match, and its conclusion caused Young to weep on the couch when she watched it on TV next to her real dad.

“It was a moment where Carmen kind of realizes she can do this and do this for herself,” Young said. “That’s something I’m still dealing with. There’s a lot of fear going into this industry. Once you realize where you were always supposed to be, there’s something very powerful and inspiring about that.”

Four years ago, Young was an assistant on the TV show, The Mentalist. Two years ago, she worked in production at Crazy Ex-Girlfriend. She had $60,000 worth of student debt to pay, lived in an apartment without air conditioning, and struggled to find her place in the entertainment industry. Now, she’s an important part of a well-received show (and she now has air conditioning in her home). She’s exactly where she’s supposed to be—in front of the camera and not behind it.

Young is also using her clout to make a statement about body image, utilizing hashtags like #ProudToBeMe and #PlusSize on her Instagram photos.

Yet, Young realizes this is a catch-22. She talks about body image and shows off her confidence and her wardrobe. But she’s known for being plus-sized, so she’s constantly asked about it in interviews. She uses her clout, but she also can’t escape its shadow when she wants to discuss something else. It’s a circle that she struggles with internally.

“If I continue to talk about being plus-sized and how great it is to get through these boundaries, will I never be asked about anything else again?” she said. “But the way to promote plus-sized inclusivity is to do the work. It’s a work in progress.”

The way Young sees it is that, at any given moment, there’s a rotation of four or five plus-sized women who are used frequently in film. If you’re not in that rotation, Young said, you’re not getting the roles. Her goal, though, is not to find her way into that in the rotation. Her only goal is to get the opportunity to play good roles and to make the most of them.

She got a small taste of that after the first season of GLOW when she discovered her petite white friend was going for the same role as her. But that ecstasy of competing for a role with no physical requirements was short-lived. She hasn’t been to an audition like that since.

Young plans to blow up that box for good.