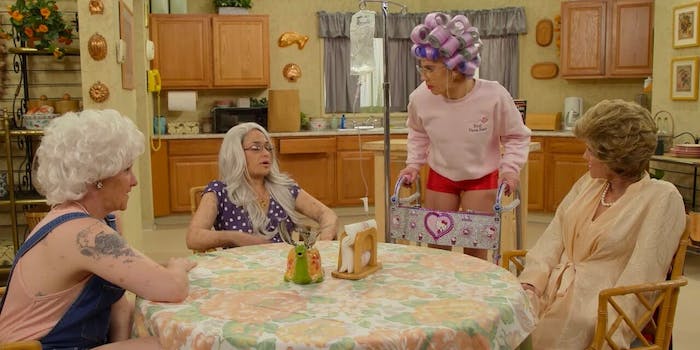 The ‘Girls’ cast gets a ‘Golden Girls’ makeover from Jimmy Kimmel

The reunion was planned even before the show ends.

With more TV shows reviving and rebooting years after they ended, it was only a matter of time until the cast of a show planned the reunion before their run was up.

Girls is ending in a few days after six seasons, so Lena Dunham, Allison Williams, Zosia Mamet, and Jemima Kirke—with some help from Jimmy Kimmel—pictured what the inevitable Girls reunion would look like. It’s Golden Girls if it had HBO’s leniency and the added awkwardness that Girls is known for—especially after Kimmel shows up as the hired stripper (or sensuality artist) with a connection to one of the girls.

Hannah randomly takes off her clothes and is writing a herpes exposé, nobody cares about Marnie’s birthday, “pitting” is apparently a thing, and Elijah hasn’t aged a day. They may all be much older, but nothing’s really changed.