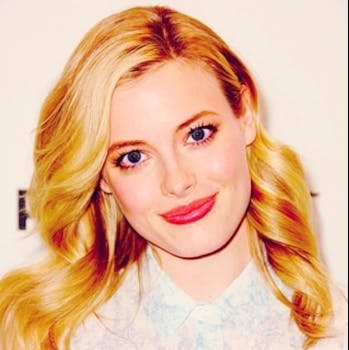 A centenarian grandmother conquered this week in Reddit's live-interview section—again.

For the second time in as many months, a century-old grandmother marched straight to the top of the site’s live-interview section by beating out a TV celebrity.

Lula Mott, whose grandson typed answers for her and who turns 100 on March 21 (but doesn’t look older than 75), beat out Community star Gillian Jacobs. Not once, but twice.

Jacobs, whose first AMA (“ask me anything”) was back in October, launched one interview on Wednesday, and then another—also on Wednesday.  Both made it into this week’s list, which is quite an impressive feat. But neither could beat out Mott.

Below, we’ve compiled the top seven posts (seven being our lucky number) from Reddit’sr/IAmA this week, as voted by redditors themselves. We’ve also included a sample question and answer from each. For the complete list, check here.

A: When will I get my money?

Q: If you had 3 cats what would you name them? (dontstopbelieving)

Q:  In a show full of complete stereotypes … how has Glenn managed to completely break the mold and not conform to asian stereotypes? He’s a unique, awesome character. (SeriousBlack)

A: Nice question. I probably can’t speak for any of the other actors on their characters. But as for Glenn, I think it comes from the fact that Robert Kirkman created a pretty great character. When it comes to me personally, I am blessed to be able to play a character like this because in the industry they are sometimes pretty heavy handed with the racism or stereotypes.
I think whats great about Glenn is that he is just a person. He isn’t a stereotype or an asian person. I think the writers did a great job walking this fine line of calling out the fact that Glenn is Asian, because to not do so would be almost overly-sensitive, and fizzling out that fact because he is an American boy.

4. We make the game Cards Against Humanity. AUsA.

Q: I noticed that you solicit card suggestions on your website. How many of those submissions are worthy of being used, and did any make the new version?

A: We’ve never used a submission exactly how it was sent in (most of them are pretty terrible) but they often inspire new ideas. It’s one of our favorite brainstorming tools

Q: What are the chances of aliens living in our galaxy? and based on our current knowledge of Physics, do you think is it possible for a human/alien to ever travel to another galaxy? (vkazemi)

A:  Our galaxy has roughly a trillion planets. Hard to imagine that they’re ALL sterile.
Traveling between galaxies is hard … typical distances are millions of light-years. That’s a trip that, even with our fastest rockets, would take longer than the current age of the universe. That’s a long time to be sitting in the middle seat.

Q: If you could pick. What film/tv series would you like Community to honour with an Homage ? (YC19916)

A: Maybe a daytime soap! What if we did a Days of Our Lives-style episode?