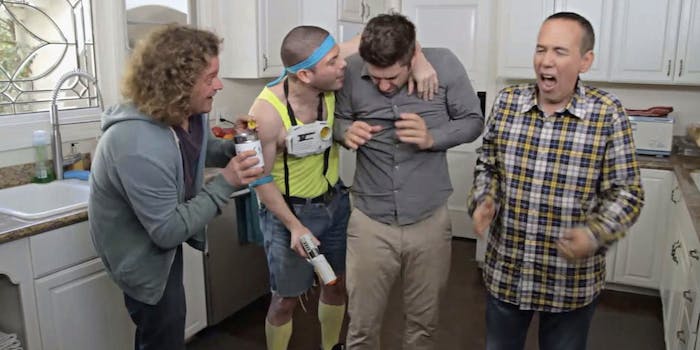 Maybe this is the key to an uncluttered social life.

If your daily social media interactions were to come to life, would it include Gilbert Gottfried acting out your Twitter feed?

In the webseries Life in Your Social Network, a promotional vehicle for Heard, a new social content-sharing network, we’re presented with a hyperbolic view of our daily digital clutter. Seen through the eyes of a cocktail party guest, this poor soul, drink in hand, is overwhelmed by the annoying guy he met at Coachella years ago, a social gaming buddy he can’t get rid of, and cloying comedian Gottfried, who spews out a stream of off-color jokes in the form of tweets.

The four-and-a-half-minute skit, aptly titled “Social Disorder,” is the first in a set of three clips designed to use humor to showcase Heard. Ben Goodman, producer of the series and executive at the new social network, told the Daily Dot his goal was to create a cutting-edge show-mercial “that people will like and share.” Goodman felt that the new category of sponsored content was the perfect vehicle for serving the dual purpose of entertaining and informing.

Goodman reached out to Hunter Davis to write and direct the three YouTube segments. The brainstorming sessions between Goodman and Davis led to two themes which will intersect as the episodes unfold. First, the goal is to show the chaos of social overload, followed, in later installments, by how Heard can help improve the management of your out-of-control posts and tweets.

The message in the first episode is subtle—perhaps a bit too subtle, as no mention of Heard is made until the end of the episode with the tagline “it doesn’t have to be this way. Heard: Social Exchange.” The oblique reference, Goodman said, is intentional. “We felt it would be more compelling at first to set up the narrative and keep it in the background,” he added.

Heard represents a familiar concept of creating a content distribution network that links content providers with targeted audiences. The difference, according to Goodman, is that Heard utilizes some advanced signals and algorithms to create a better profile of a user’s interests.

“We have discovered the balance between personalization and being overpersonalized,” added Goodman.

Heard is available for iOS, Android, and Windows. There is also a desktop version for both Mac and Windows.

Screengrab via Life in Your Social Network/YouTube