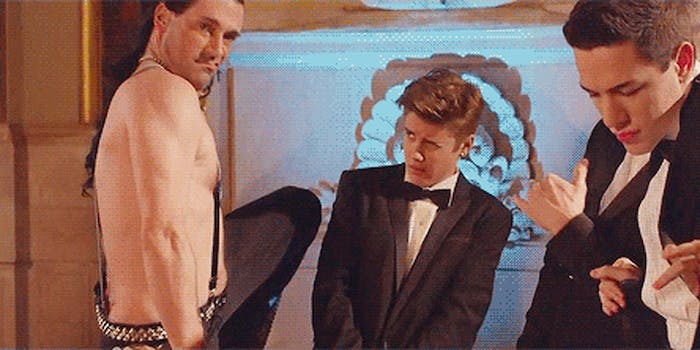 It’s hard to top a legend, but this week’s 100th digital short on Saturday Night Live did just that, on more levels than one feels comfortable admitting.

In three and a half minutes, the show referenced all of the top hits and most of the also-rans from The Lonely Island—Andy Samberg and partners Jorma Taccone and Akiva Schaffer. Cameos included Natalie Portman reprising her potty-mouth rap, Justin Timberlake with his dick, in a box, Michael Bolton still pining for Jack Sparrow, and Julian Casablancas still boom-boxing away.

Since rumor has it this is Samberg’s last season on the show, the cast had to make it one for the memory books (or is that one for the YouTube favorites?), and the show certainly succeeded. This one may be known to trivia mavens as the 100th digital short, but for the rest of us, it’s probably going down in history as the “We’re Going to Suck Our Own Dicks” number. (Watch the video linked above to see why.)

Doesn’t Justin look thrilled? The 7981 rebloggers and likers on the Beaver Paralyzer Tumblr certainly are.