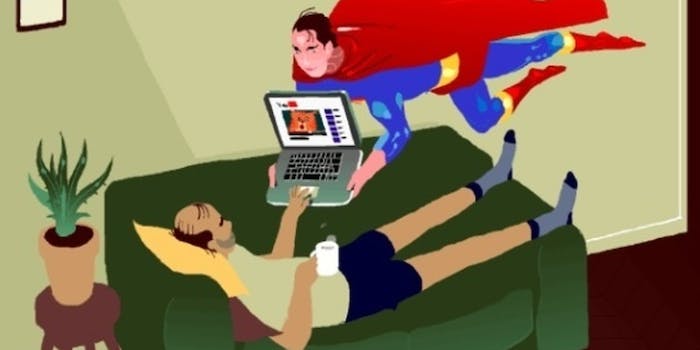 GIF comic books are kind of a perfect idea

The next chapter of digital graphic novels may look a lot like those by French animator and illustrator Stephen Vuillemin.

The next chapter of digital graphic novels may look a lot like those by French animator and illustrator Stephen Vuillemin. His comic, Schoolgirls, utilizes GIFs to infuse panels with bursts of animation. The tenth and final episode in the 300 GIF series premiered this week as part of the Arte supported publication, “Professor Cyclope.”

“I read comics very fast. I don’t spend a lot of time looking at the pictures,” explained Vuillemin. “I wanted my readers to be able to do the same with my comics, despite the animation. So I came up with some rules. One: If there is a speech bubble, it stays on for the loop, so that the reader doesn’t have to wait for it to appear to read it. Two: a single frame of each picture should give enough information to understand the action. The animation is kind of a “bonus” to it, but you should be able to read it without looking at the animations.”

Vuillemin’s innovation to use GIFs stemmed from his frustration with the traditional publishing world.

“I was just back from the Angouleme comics festival with my comic book project. I showed it to a few (French) publishers there, and I was a bit disappointed. It seemed to be a very slow process to get it published. Some of them were interested by the book, but none of them were ready to pay me anything before the full thing was done. Also, I was surprised to see that some young comics artists/publishers would pay to get a really tiny stall there, in a shady corner of this festival, instead of thinking to open a blog or a website. I decided not to do it like them, and to make an online comics: faster, cheaper, more efficient. I wanted to use the specifics of the internet, that how I came up with gifs.”

Read the rest of the comic here. View the full story on Motherboard.