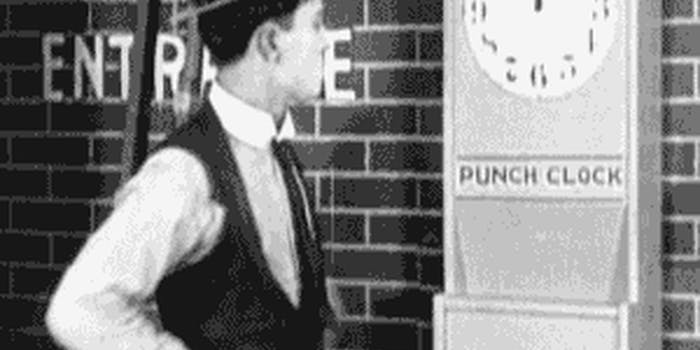 Celebrate May Day with this memorable from the 1921 silent film, The Play House.

May Day: It’s what the rest of the world has instead of Labor Day. Of course, they also have better May weather than September weather, which is essential for festive activities like Maypole dancing, marching with the brothers and sisters from the union, or strenuously beer tenting. We’ll raise a coffee cup in solidarity with the workers of the world uniting, whether they’re marching in Manila, partying in Paris, clogging in Cardiff, or Occupying in Omaha.

And right there along with us will be this spirited GIF of silent movie actor Buster Keaton. I bet you always wondered how he got his name; now you know. Keaton specialized in playing nice guy underdogs, perpetually overlooked and overworked. If he got the girl (and he sometimes did), it was because her first, flashier choice had flamed out. If he got the job, which he usually did if not the paycheck, he was sure to wish he hadn’t.

In the 1921 movie The Play House, from which this scene is taken, Keaton got the job, but let’s  hope it came with extended benefits for some anger management workshops. Since Keaton directed and produced it, as well as starred in it, and in the opening sequence played an entire theatre company and orchestra, plus the audience, the poor man could really have used some stress counselling.

And a vacation, if only for one day.

This GIF comes from the denzoleone Tumblr, where it’s gotten 368 notes of solidarity.