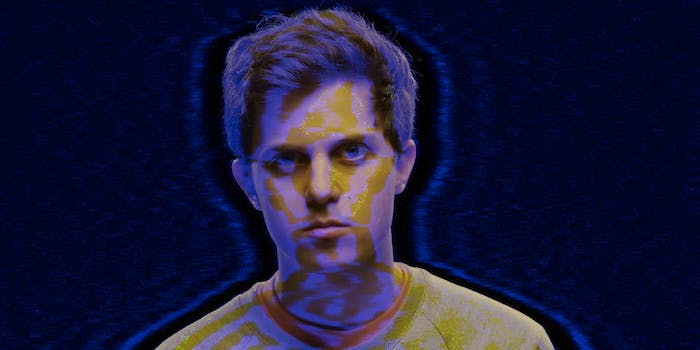 George Watsky isn’t an artist who’s concerned with the quantity of his fans: He’s after quality.

The spoken word poet and rapper who rose to fame on YouTube and recently released his fourth album, All You Can Do, is taking that focus on quality and a deeper fan experience to heart as he crafts his next tour. He’s instituting a somewhat unheard-of mechanism for his fans: a punch card that gives them perks the more shows on the tour they attend.

“I have fans who are willing to drive from really far away to see a show, and we’re nearing the point where we have so much material as a band that we could play a different set every night,” Watsky told the Daily Dot. “We want to try and create a sense for people that it’s going to be different every time; this is an experience. If I can encourage people to come to multiple shows, I can sell more tickets and I can pay my band more and we can do more as an act.

“I guess the danger is our weirdest, craziest fans will be following us from show to show. But the Dead had people rolling around with them all summer, and it was awesome.”

Watsky is right that dedicated fans wanting to see a performer multiple times in a single tour is not a new phenomenon, but the incentivization of that fandom from the artist is what sets Watsky apart as part of a new generation of creators, even if he’s not sure if the idea is going to work just yet.

“I don’t know if it’s a good idea yet; I guess time will tell,” he explained. “But the general inspiration for that was a gradual acceptance of the fact that I may never become a mainstream artist. What I have the ability to do is have a very long career with a group of very loyal supporters if I stay true to continuing to create stuff that I feel passionate about. I think that’s possibly a better position to be in than someone who has a huge platinum album but who falls off because they’re replaceable.”

Watsky rose to prominence thanks to a combination of a string of successful YouTube videos showcasing his fast rapping abilities and spoken word performances and relentless touring across the country. His successful viral hit where he raps with a cat looking on (24 million views and counting) landed him the attention of mainstream media, but his unflagging touring and creating kept him in the hearts of fans. Watsky sees the intersection of his digital presence and his in-person performances as key to the kind of artist he hopes the world sees him as.

“I want to maintain a standard of quality, but I also have a large interest in maintaining live performance as a big element of what I do,” he explained. “The reason I post live clips is  because I want to create an awareness. It’s about saying, ‘I want to put this out to you because this is how I want you to see me as an artist.’ I try and put out the work that I want people to see, and have that shape their impression of me.”

One of Watsky’s first posts was a clip of his Def Poetry Jam performance, an illegally posted clip of a traditional media moment on YouTube, and one he says he’s thankfully never been called out on. That moment helped launch his life on YouTube, and without the platform, he knows his career would be at a completely different point now.

“I think I would be touring the country, doing spoken word performances at college campuses,” Watsky said. “I definitely don’t think I’d have the size of an audience that I do, I don’t think I’d be able to target a specific type of audience that loves what I do. It’s allowed me to stay really true to what I do and find an audience. I’m lucky the platform came along when it did.”

Watsky’s most recent album is a tribute, he says, to the music his parents taught him to love growing up, and an attempt to bring his parents’ musical influences to the type of music that he makes.

“If I were to give someone my elevator pitch on what I do, I would say that I’m a rapper and a spoken word poet. There’s an amount of humor involved, but I’m not a comedy rapper.

This album particularly, it’s not not for people who listen to hip-hop—it is for hip-hop heads—but it is for people who have a wide variety of genres they listen to. It incorporates elements of folk rock and psychedelic rock. It has songs that veer between being influenced by Rage Against the Machine and ones where we were listening to Jimi Hendrix before they recorded it.”

He spent the summer as part of Warped Tour, traveling the country both exposing himself to new fans as a band distinct from the typical sound for which the festival is known, and connecting with his already dedicated masses. He also churned out several videos in support of the new album. The most recent video for “Bet Against Me” explores glitch and datamoshing, and he promises a high production video for “Let’s Get High and Watch Planet Earth” that will be released in October just before the U.S. leg of his world tour.

“We’re always trying to make sure the concept of the video and the way the song sounds interlock,” he said. “We shot a high production value video that’s funny, but that’s epic and we want to make it look epic. We’ve got a helicopter drone shot. We really went all out on that one.”

Speaking of that world tour, Watsky is not the type of American artist to tack on a U.K. date and call it worldwide. He’ll trek down to Australia and even India in support of this album, even though he describes ambitious trips like those “money losers” because of the cost it takes to bring his band and experience that far from home. Despite the expense, bringing his music far and wide (Watsky cited Brazil and Iceland as two other dream destinations) is important to his sense as an artist, especially one who’s already been able to reach so far with the help of the Internet.

“I don’t know how long I’m going to be able to do this thing with the band, so I want us to be able to create as many lasting memories as we can while we have the opportunities,” he said.

Fans are definitely poised to enjoy those memories with him—as many times as their punch cards allow—when he kicks off his tour this month.