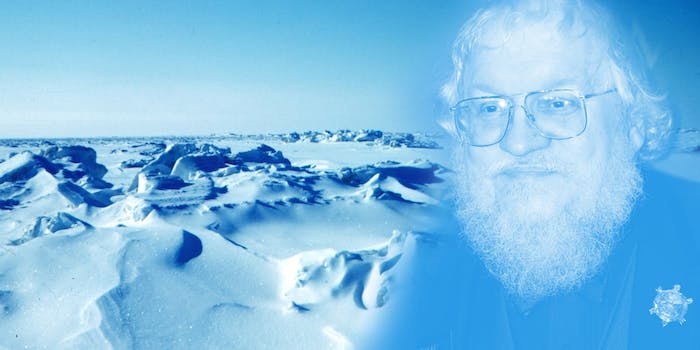 "What is dead may never die."

George R. R. Martin is the best-selling author of the critically acclaimed A Song Of Ice And Fire fantasy series, an accomplished television screenwriter, a 7-time Hugo Award winner, a loving husband—and, as of Saturday, Aug. 23, a participant in the viral charity ice bucket challenge.

Designed to encourage donations to the ALS Association—a charity combatting amyotrophic lateral sclerosis, a neurodegenerative disease commonly known as Lou Gehrig’s disease—the challenge has been a runaway success. It’s raised more than $70 million in less than a month (compared to $2.5 million in the same timeframe in 2013). Along the way it’s seen everyone from George W. Bush to drugged up teens take part.

Participants are nominated by previous challenge-takers, at which point they have 24 hours to drench themselves in ice water, or donate $100 to the ALS Association (though you’re are encouraged to donate even if you do take the challenge).

Some, like Bill Gates, take the soaking stoically—but not so for Martin, who positively shrieks when he feels the cold.

GRRM’s references the Iron Islanders’ aquatic baptism rituals, shouting “what is dead may never die!” after hopping into the swimming pool. But even if no-one has nominated you to meet the Drowned God, you can still donate by visiting the ALS Association’s website or by clicking here.