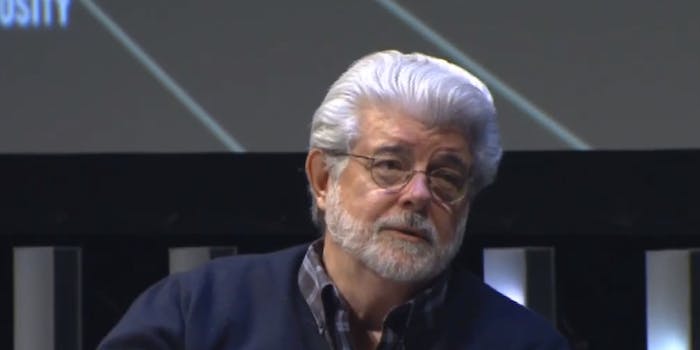 It's amazing to think that all of this sprang from the mind of one man.

Lucasfilm may now be in the hands of Disney, but George Lucas will always be the genius who first dreamed of and introduced us to that galaxy far, far away. So when the Maker decides to talk about the meaning of Star Wars, we stop to listen.

Lucas discussed the topic during an interview with Charlie Rose on Oct. 17 at Chicago Ideas Week. In the past, Lucas has touched on how myths and the work of mythologist Joseph Campbell influenced the creation of Star Wars, but here he talks in more depth about that mythology and how its messages—and thus the messages in Star Wars—appeal to everyone.

“With Star Wars, the religion and everything was so taken and put into a form that was easy for everyone to accept and so it didn’t fall into a contemporary mode where you could argue about it,” Lucas told Rose. “It went everywhere in the world because they could say, ‘Oh, the things I believe in are the same as that.’”

Lucas boils Star Wars down to two basic ideas: don’t kill people and love others. Words to live by.

You can find more clips of Rose’s interview with Lucas on his YouTube channel or watch the full interview on the Chicago Ideas Week website.