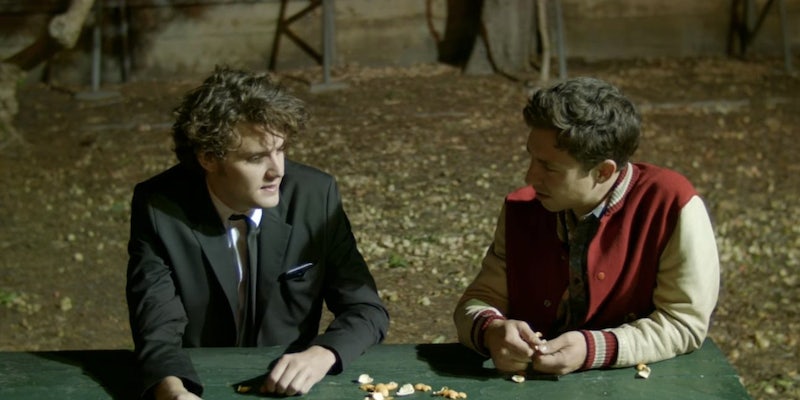 'I had a gut impulse to write something that’s super me and super free.'

Lenjamin is going bi, but after a subpar date with gender-fluid Freckle, he runs into an interested Karen, who’s on an equally subpar date with straight Billy, who Caleb is secretly in love with while also holding a FaceTime-based romance with his international beau Benicio.

If you’ve got all that, then you’re now part of The Gay and Wondrous Life of Caleb Gallo, the new webseries that snappily addresses this web of interpersonal drama in its 20-minute pilot, now available on YouTube.

The series is the work of Los Angeles actor Brian Jordan Alvarez, who plays the title character and whose biggest viral hit previously was “What actually happens when gay guys see other gay guys and straight people aren’t around,” achieving over 2.5 million views. After making videos that clocked in at under a minute on YouTube for the past year, Alvarez decided to graduate to longform work of his own design after partnering with Brad Wergley on the webseries Boy Toys, which followed the absurdities of looking for love in L.A. After that finished, Alvarez realized what he really wanted was to write a whole story from his own point of view.

“I had a gut impulse to write something that’s super me and super free,” Alvarez told the Daily Dot. “Essentially making exactly the show I want to make, because I have this power position where my YouTube channel is going to get attention either way. It was a very sort of freeing inspiration. I went for a drive one day on some Red Bull and thought of this whole plot, basically.”

While Alvarez sees himself more as part of Hollywood than part of the YouTube community, his frustrations with the limitations of Hollywood led him to YouTube as an outlet for creativity.

“I was going out for auditions all the time, but it was very disempowering,” he said. “Most of these shows weren’t even good. I think everyone would admit that. There’s some really great TV now, but most everything you go out for as an actor you’re like, ‘Oh, I’m funnier than this part I’m trying to get right now.’”

The Gay and Wondrous Life of Caleb Gallo, on the other hand, is laugh-out-loud funny just as often as it’s painfully relatable and hold-your-breath emotional (especially the last few minutes of the premiere, which volleys from touching to pure exuberance). From the speed of the dialogue and use of texting and FaceTime to the simple back-and-forth of a day of endless phone calls between friends, Alvarez weaves a thick and relatable web of character and plot into a short 20 minutes. The show has the polish of an expensively produced pilot, but Alvarez went at it without the help of a production company and just $10,000 from an investor, which he’s split among the first three episodes.

“I should have asked for more, and I knew that when I was asking for it, but I’d never really asked for a big chunk of money,” Alvarez laughed.

Alvarez has been making films since childhood, which helped him craft something high-end with minimal budget. Despite his agency Paradigm shopping the finished pilot to potential backers, Alvarez is forging ahead with his intended five-episode run.

“I watched the Mark Duplass talk at SXSW where he was like, ‘You need to just be making stuff, you need to not be waiting on executives to develop your stuff,’” Alvarez explained. “Even when they move into development, because you have so much heat around you, keep making content yourself because it kind of gives you this power of, ‘I don’t care, I’m just going to keep doing it either way.’”

Alvarez definitely has heat on him. He was a participant in 2015’s CBS Diversity Showcase—alumni like Kate McKinnon have gone on to top-tier success—and even had his own SNL audition this past August. (Lorne Michaels’ reaction, according to Alvarez: “Like so deadpan. And then occasional light chuckles.”) He’s now guest-starring regularly on the CW’s hit Jane the Virgin as he continues to audition for more leading roles.

“I want to be a fucking movie star,” he laughed.

If you’re jealous of everyone who got into Broad City when it was Web-only, The Gay and Wondrous Life of Caleb Gallo is your required new obsession. Love this now and feel superior when Alvarez takes it to the big time.