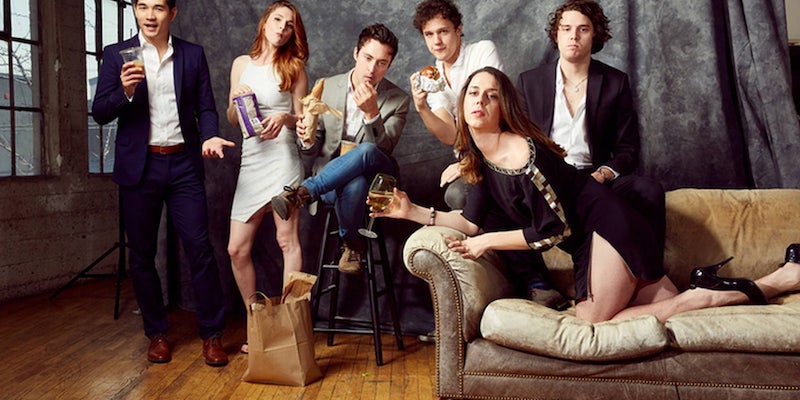 This is what it's like to spend a day on set.

The most recent episode of The Gay and Wondrous Life of Caleb Gallo opens with the titular Gallo and co-star Freckle in the car, with Freckle recounting her latest sexual conquests. As Freckle, played by Jason Greene, details the boys, she makes sure to call out their race to Gallo, He interrupts.

“This could be a colorblind story,” argues Gallo. “There’s a race problem in Hollywood right now.”

“And in America, a racism problem,” counters Freckle. “This story isn’t racist, it’s diverse. If everyone in it was white, then it would be racist, Calleb Gallo.”

It’s better television than anything gracing prime time at the moment, and it’s actually a webseries.

While quality web productions aren’t rare, they’re now often funded and produced by major players in the industry, from YouTube itself to multi-channel networks and funded networks like go90.

Caleb Gallo is completely independent, the brainchild of actor and writer Brian Jordan Alvarez, who got help from friends and a single investor to get his vision off the ground earlier this year.

The series, which premiered to raves in January, even made a stop at the Tribeca Film Festival, with a screening as part of its inaugural Digital Creators Marketplace. The project’s five-episode first season continues as an independent venture, filmed completely before Tribeca even began. While most webseries follow structured release schedules and fast turnarounds, Caleb Gallo has moved at its own pace.

In March, during a several-day sprint to finish the final three episodes, Alvarez and his crew opened up their intimate set to the Daily Dot to show firsthand what it takes to make high-quality, independent video.

Freckle’s studio apartment in episode 4 serves double duty as Jason Greene’s actual apartment, and the crew has overrun it. It’s barely controlled chaos as everyone’s bags are shoved under a small kitchen table topped with snacks

Greene, who’s commanding the room despite all this, is swapping outfits and eventually settles on a robe. We squeeze into the laundry nook, whispering as the crews try to shoot just a room away. Every minute is precious when you’re footing your own bill. Greene and Alvarez have been friends for 10 years, and after working together on a short video, “When your gender fluid friend gets more attention from straight guys than you,” they realized there was a space for Freckle in the pilot and beyond.

“The character is a character I’ve been working on for many years, so it’s this character’s opportunity in this show, more so than me,” Greene said. “I always want Freckle to be flawed, I always want Freckle to be experiencing life and vulnerable, and we all are. I don’t want a perfect character; that doesn’t challenge me as an artist. So much of this project and show I can’t even explain. Things just work, they just make sense. I look forward to what he gives me to do.”

To set the mood for Freckle’s boudoir, it takes the small army of everyone on hand. Daniele Watts, who joins this episode as Gallo’s ex-actress shaman sister (they’re both adopted), swoops in as set dresser as the group frantically flips camera positions—from shooting Freckle’s walk to the balcony and an interaction with the two men to their sexy entrance.

Candles are lit and scattered, crew bags are hidden with strategic sheets, and everyone is crowded onto the balcony. Greene’s neighbor even pokes his head out during the shoot to watch as the production stretches into the night.

Episode 4 is also the first time Benicio, payed by Antonio Marziale, appears beyond the bounds of a FaceTime screen as Gallo’s faraway lover. Like his character, Marziale is not an American, and so, filming options have been limited. But he was able to come in for the final, emotional episodes that put Gallo and Benicio’s relationship into the real world. Marziale’s character mirrors Benicio in other ways, too.

“What I love about this show is Brian listens to what we have to say and then works on that,” said Marziale. “I identify as genderqueer, and I think a lot of Hollywood’s expectations of someone who presents in a masculine way and tries to box you into these jock roles. Even if that’s the way that I look, that’s so not the way that I am. I keep trying to push myself to bring my authenticity to what I am doing, and that’s so easy to do in this.”

Benicio casually appears in a dress in this episode, and in any other series that might be the big reveal. But in Caleb Gallo it’s just moment before a tender kiss and a shirtless group dance party.

“[The show is] so unique in its representation,” said Marziale, who jokes that he puts on “bro drag” for other roles (you can see him in the Netflix original Project Mc2 as a space prince). “A lot of the conversations [Brian and I] have end up in the script. Being able to celebrate my own femininity without shame is a lot of what we’re trying to do. Benicio will wear a dress, and Caleb will be like, ‘That’s amazing!’ It doesn’t have to be this big thing. I think that’s something you don’t see. Representation for people who are not cisgendered is very limited.”

The shoot is a lot of waiting for omnipresent sirens and helicopters to clear the area to keep the sound pure and then a lot of hurry up to wrap shots as quickly as possible. While Marziale and Alvarez run through a tearful phone call on the balcony, the rest of the cast stays inside, sitting on the bed and talking in hushed tones between takes.

Even though Alvarez recorded his half of the scene separately in the car, he’s fully present, going off book and working through options with Marziale to keep the moment between them fresh.

Of course, it’s Alvarez who has final say in what makes it to the web. He’s not on camera this night, so while he’s dressed like Gallo, he’s wearing many hats, from director to actor and from producer to writer. He says he does it because he thrives on the control .

“It’s just like when you’re making movies as a little kid, and you do it all yourself,” he explained. “Essentially, I love doing everything myself, so as the production grows, it’s a process finding people who I trust to take on parts of the workload that I am no longer capable of doing. But it’s been happening quite organically.”

While the series wrapped months ago, this most recent edition comes in the wake of the Orlando shooting. For Alvarez, putting out queer and accepting art in a time like this is more important than ever, even if the message remains unchanged since the show’s inception. It’s about love.

“Telling stories like this is part of how we change the world,” Alvarez said. “If we can change people’s minds by making them laugh … Maybe getting someone who has been raised to have negative feelings toward gay people to say, ‘This show is fucking funny; maybe gay people aren’t so bad,’ then we’re doing our work.”