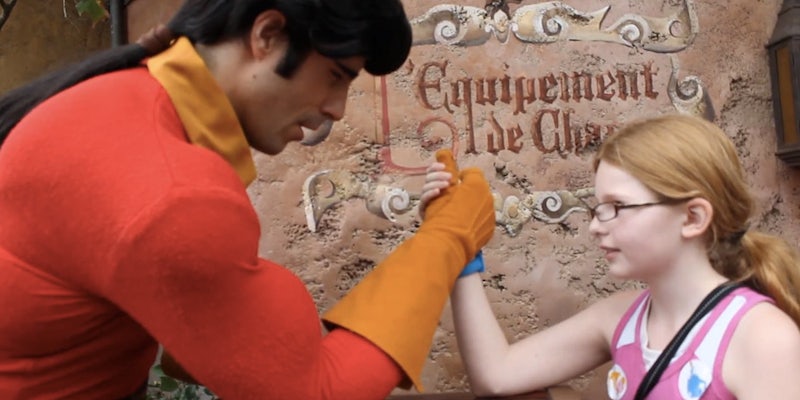 They say no one is as slick as Gaston, except maybe this 11-year-old girl.

Gaston may have biceps to spare, but one 11-year-old girl was definitely not intimidated when she challenged the Disney villain to an arm-wrestling match.

This young woman had her interaction well-planned, totally ignoring Gaston’s typical misogynistic banter, distracting him by showing him a mirror in which he might gaze upon himself, and then setting him up for an epic takedown in the field of arm wrestling. We won’t spoil the outcome, but we suspect you’ll be cheering.

This is far from the first time Gaston has been challenged recently. Earlier this week a man went head-to-head in a pushup contest, and Gaston quickly walloped him with some one-handed, showy moves. However, he was not so lucky when a young child name Isabella gave him the talking-to he deserved in December. In addition to letting him know Beast is her favorite, she also promised him he’d never marry Belle and that Beast would beat him up.

What’s clear here is Gaston may be able to get a leg-up on guys, but it’s young women who are making sure the buffoon is publicly disgraced in all the right ways.