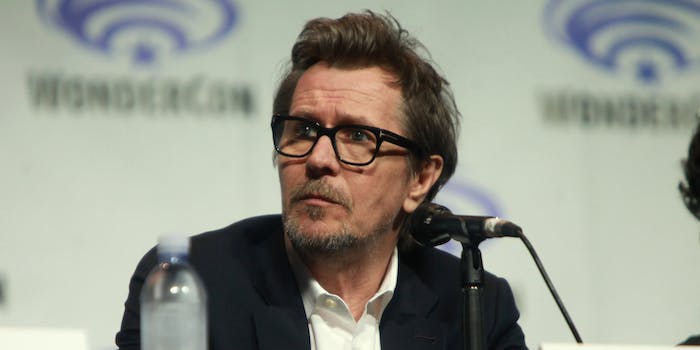 It’s the apology Gotham deserves, but not the one it needs right now.

Looks like someone’s taking a page out of Jonah Hill‘s apology playbook.

In an interview with Playboy that was published on Tuesday, Gary Oldman went on a tirade about hypocrisy and political correctness. Attempting to defend the actions of fellow baby boomers Mel Gibson and Alec Baldwin, he went on an obscenity-laced rant that was peppered with racial and homophobic slurs but was chiefly anti-Semitic in nature.

Oldman’s comments left him at odds with the Anti-Defamation League. The actor issued an apology that seemed earnest but clumsy and more than a bit wince-inducing, with one paragraph being essentially akin to the cliche “but some of my best friends are Jewish!” His attempts to sign off with some Hebrew seemed patronizing at best.

Rounding out his press-turned-apology tour, Oldman appeared on Jimmy Kimmel Live in a previously booked apperance to promote his upcoming film Dawn of the Planet of the Apes. Choosing to address the uproar at hand, the Brit spoke humbly, using rather expensive words in his delivery of an apology that seemed somewhat rehearsed—a fact that Kimmel jokingly himself pointed out, citing Oldman’s sublime acting skills. The actor self-depricated, calling himself “an a-hole,” and apologized to both those offended and his Team Oldman fanbase. His apology, while certainly needed, hit all the marks of polticial correctness that he originally lambasted in his Playboy interview, causing many to mark it off as simple PR triage.

Regardless of Oldman’s sinceirty, Kimmel did a wonderful job of hand-holding his guest through his apology and adding some much needed humor to the rather labored remarks. Now let’s leave old men and their antiquated thoughts in the past and get back to Andy Serkis pretending to be a monkey.