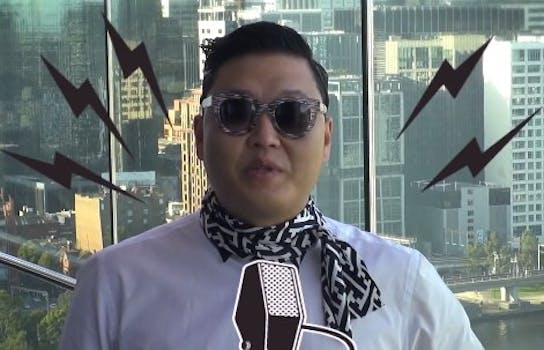 Here’s how Psy is following up “Gangnam Style”

The Korean megastar is out to prove he's more than a one-hit wonder on the world stage.

We’ve already survived the Psypocalypse, but now we’re just days away from the second coming of Psy.

The Korean rapper is set to attempt the seemingly impossible: successfully following up his international megahit “Gangnam Style,” the most-played song in YouTube history. He’ll debut his first post- “Gangnam”  single, “Gentleman,” during a concert that will stream live on YouTube Saturday.

“After putting Seoul’s Gangnam district on the map and single-handedly reviving the powder blue tux, Psy’s got big plans this weekend and you’re invited to get involved,” YouTube announced in a blog post Thursday.

We haven’t seen much of Psy since he officially retired the hit that spawned a thousand covers and parodies—and became the first video on YouTube to reach 1 billion views—on New Year’s Eve, but he’s set to return at his “Happening” concert at Seoul’s World Cup stadium.

Concert-goers have been instructed to wear white for the concert, and have been given hints about the dance routine.

“The dance is one known to all Koreans but new to foreigners,” Psy, who has long been famous in Korea for his many dance moves, told South Korean TV. “It will be presented in Psy style.”

“Gentleman” is a song with a techno beat and catchy one-liners such as “I am a party mafia!” and “I am a mother father gentleman.” While it’s too early to see if it will live up to the expectations Psy set with “Gangnam Style,” the boost “Gentlemen” gets from YouTube views will certainly help its chances on the Billboard Hot 100.

The concert will go live at 6:30 pm local time on Psy’s YouTube channel (2:30 am PT and 5:30 am ET respectively), but if you can’t stay up late enough or wake up early enough for the affair, you can always watch it afterwards on YouTube.

“If I said he was under no pressure, I wouldn’t be telling the truth,” Psy’s manager, Hwang Kyu-hwan, told The Guardian. “But he’s not expecting a repeat of Gangnam Style…and that’s taken the pressure off a bit.”

The single is set to release Thursday at midnight local time on iTunes (so it’s currently not available in the U.S. or U.K.), but there are still some leaked versions on YouTube that have yet to be pulled offline.