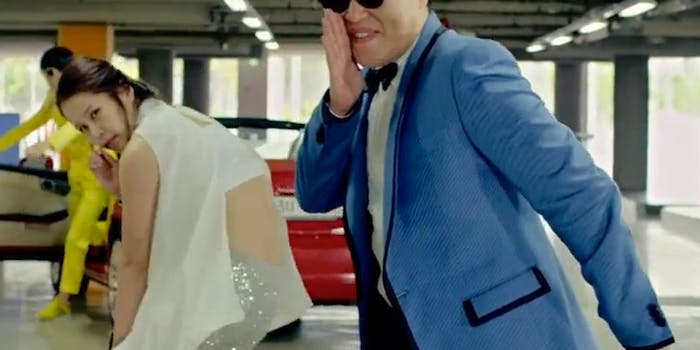 It's Guiness official: The South Korean pop star's music video is the most-liked in YouTube history.

PSY and his dynamic “Gangnam Style” music video are officially doing that unstoppable horsey dance into the record books.

The Guinness World Records announced Friday morning that the video, a 4:13 whirlwind of South Korean glamour and glitz, has broken the record for “Most Likes on YouTube” with 2,141,758, breaking the previous record of 1,574,963 held by LMFAO’s outrageous “Party Rock Anthem.”

“Gangnam Style”‘s ascent ranks has been rapid and rampant since first hitting YouTube July 15, and it’s no secret why. The Daily Dot detailed the video’s full-blown theatrics when it crossed over the virtual Pacific and touched down on American computer screens in late July. Since, its view count has risen to 225 million while showing no signs of slowing down. Just last week, DD Hater Jordan Valinsky declared “Gangnam Style” the IN parody clip of the fall.

In a statement released Friday by Guinness World Records, community manager Dan Barrett said that it’s “great to be able to award a record for this tremendously popular video.

“In years past it was unthinkable that something would be viewed a hundred million times, and now ‘Gangnam Style’ has achieved more than twice this figure in just three months. PSY—your certificate is waiting here at our offense, come pick it up any time!”

Okay, Guinness! I’d imagine he’ll mosey on over any minute.