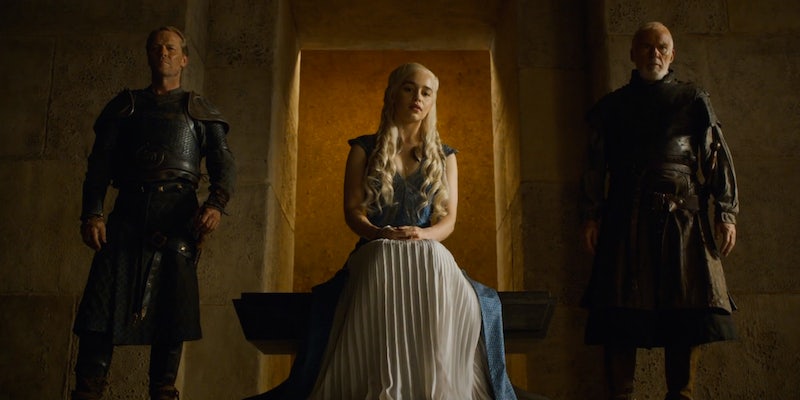 A ‘Game of Thrones’ special is on the books for February

New information may be coming sooner than we think.

Game of Thrones fans don’t have to wait until next spring for more intel on the fifth season.

Instead of scouring and analyzing even more flashy 10-second trailers sent by Raven (for now, anyway), HBO has added a Game of Thrones special to its schedule. Titled Game of Thrones: A Day in the Life, it’s set to air on HBO Feb. 8, 2015 at 7:30pm ET.

HBO has yet to make an official announcement on the special, and it’s possible that it would’ve gone unnoticed a little longer if it hadn’t been for some astute Game of Thrones fans, who then tipped off Winteriscoming.net. 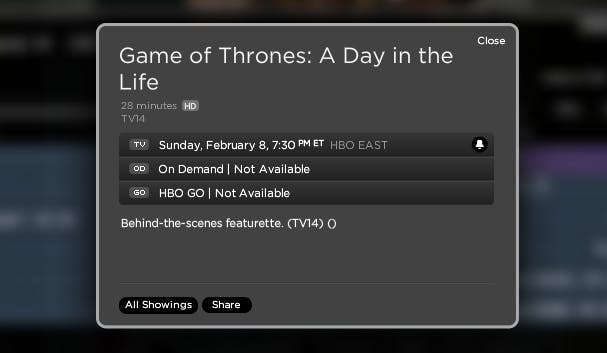 Little else is known about the special so far other than what’s shown on the HBO schedule. It’s a “behind-the-scenes featurette” and will be around 28 minutes, so you can fit that in before your 8 o’clock show comes on.

It sounds similar to the featurette HBO aired last year, Ice and Fire: A Foreshadowing, which gave fans a detailed look at the season ahead. We’re going to see the cast—in costume, most likely—give us the tiniest teases, and we’re going to eat it up before overanalyzing all the background shots and B-roll.

That one, like A Day in the Life, blocked off 28 minutes. However, Ice and Fire: A Foreshadowing ended up clocking out at 15 minutes, and it’s entirely possible that A Day in the Life could do the same. The timing of the special may say even more about when the new season will come.

We first got a trailer for season 4 on Jan. 12, 2014, and the first special went online on Feb. 9. The show premiered on April 6. With A Day in the Life coming out Feb. 8, 2015, is is possible that we might get a trailer in January and another early April premiere? We’ll definitely be keeping a watchful eye on the schedule—and our YouTube feeds—from now on.