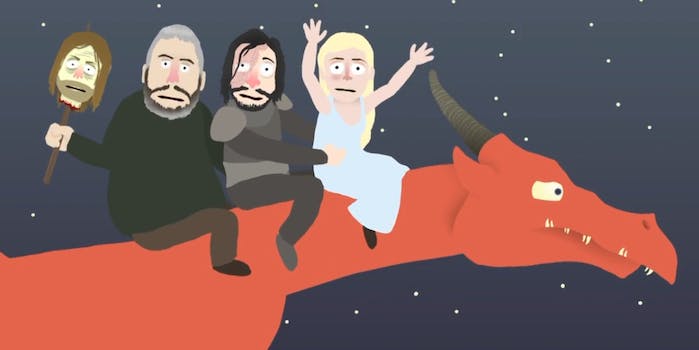 A 'Game of Thrones' story for youngsters is just as disturbing as the real thing.

This post contains spoilers for Game of Thrones and A Song of Ice and Fire.

Characters on HBO’s Game of Thrones seem to have a life expectancy that can be measured in minutes, so it’s probably not the best source material for a kids show. Nevertheless, author George R.R. Martin—whose A Song of Ice and Fire books are the basis for Game of Thrones—had some fun promoting a fictional new series for Conan. It’s called Lil Thrones and it’s downright disturbing.

The brief parody trailer is pretty creepy, and it also happens to be packed with spoilers, especially if you aren’t very far into the show or books yet. If you’re planning on watching or reading the actual story anytime soon, do yourself a favor and avoid this until after the fact. You’ll enjoy it more, and dodge some pretty important plot points as well.

It’s definitely creepy, but with how popular the Game of Thrones name is at the moment, a show like this would probably end up being a hit, too.

OK, it’s funny, George. Now hurry up and finish The Winds of Winter before new seasons of the show overtake you!