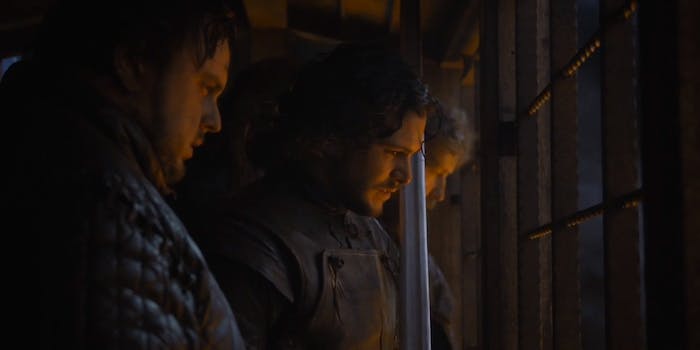 ‘Game of Thrones’ is coming to IMAX

A Game of Thrones trailer is coming—not to YouTube, but rather the big screen.

The hit HBO fantasy will be invading screens across the U.S. for a limited engagement on 150 IMAX theaters, and fans will be able to view an exclusive trailer for the upcoming fifth season along with the final two episodes of season 4—“The Watchers on the Wall” and “The Children,” the latter of which received a Writing Emmy nomination.

Although shows like Doctor Who have aired episodes in theaters, this appears to be the first time a TV series will appear on IMAX screens.

The limited engagement will run from Jan. 23 to 29 with tickets going on sale on IMAX’s website Tuesday, according to the New York Times.

Bringing Game of Thrones, which already has somewhat of a cinematic feel, to movie theaters was a logical choice for HBO.

The show “is one of the few television shows that has the scope and cinematic qualities to really support the IMAX format,” HBO’s chief marketing officer Pamela Levine told the Times.

The fifth season is currently slated to debut some time in April, so choosing January for the limited screening was both strategic for HBO’s marketing efforts and ideal for IMAX, whose light schedule allows for the screenings to take over screens in the biggest markets.

Game of Thrones has yet to release a full trailer online, but its series of mobile mini-teasers have both excited and frustrated fans with its minimal flashes of new footage. A TV special is currently planned for February.