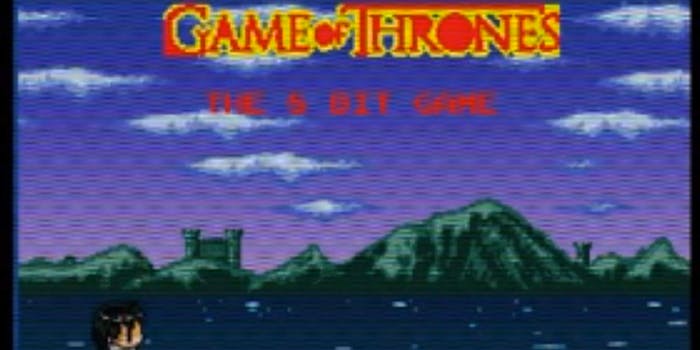 At last, meet the rightful heir of ‘Game of Thrones’ video games

This free-to-download side-scroller has already gotten rave reviews from Wired and Kotaku.

As even the most casual Game of Thrones fan will tell you, there is a whole host of things of which Jon Snow knows nothing: love, the dangers that lie north of the the wall, how to avoid getting arrowed up by an aggrieved ex-lover, etc.

However, up until this point, the most egregious gap in the knowledge of Ned Stark’s bastard son is the simple joy of button mashing his way through an old-school side-scrolling platformer. Lucky for him (well, probably not because he’s technically, you know, fictional), Spanish game designer Abel Alves, who is currently based out of Uruguay, has created Game of Thrones: The 8 Bit Game and made it available as a free download.

“I’ve tried to make some video games before, but I was not very happy with the result,” explained Alves, who is responsible for the Spanish language comics like Zombess: Teenage Psycho Killer, to Wired in an email. “This time, I spent more time and effort thinking about reaching a larger public. I knew I had to use a franchise that is known, and Game of Thrones has a universe very easily adaptable to a platform game: Mythical creatures, great heroes, terrible battles. So the decision was easy.”

While this isn’t the first video game based on George R. R. Martin’s epic series of fantasy novels, it may actually be the most enjoyable to play. “The console game was rubbish, the browser-based social strategy game lacks action,” wrote video gaming blog Kotaku in a post that labeled Alves’s fan-created addition to GoT’s interactive canon as “the best Game of Thrones video game so far.”

Check out the game’s trailer: