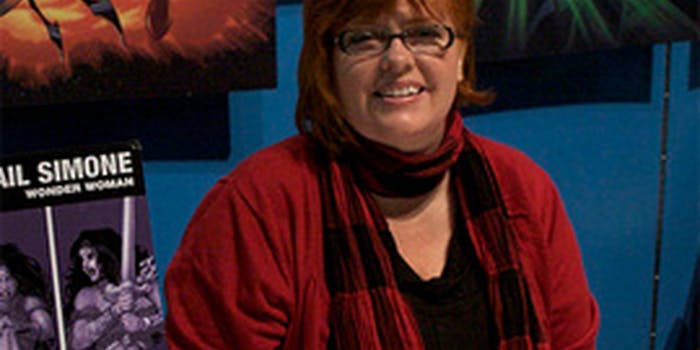 "I KNOW WHO THE NEXT WRITER ON BATGIRL IS," DC comic writer Gail Simone posted to Tumblr on Friday. "And her name is ME!"

“I KNOW WHO THE NEXT WRITER ON BATGIRL IS,” DC comic writer Gail Simone posted to Tumblr on Friday. “And her name is ME!”

The details are as sketchy over DC’s re-hiring of Simone, acclaimed head of its current Batgirl reboot, as they were over Simone’s inexplicable firing from the project two weeks ago. In the ensuing backlash from fans and criticism of the decision from industry insiders, DC has remained mum, leaving news about its decisions to come from Simone and interim writer Ray Fawkes. Simone confirmed on Friday that she would be returning to the series for issue #19, with Fawkes doing issues #17 and #18 in her stead.

Simone also mentioned that she would be doing rewrites, but declined to specify what kind. Much of the speculation over her initial replacement as Batgirl’s writer involved her plans to bring in a transgender character and focus on Batgirl Barbara Gordon’s recovery from a long disability. Questions put to Simone on Twitter about whether the new rewrite would retain those plans went unanswered.

But the vagueness didn’t stop fans from celebrating Simone’s return. “It’s a Christmas miracle!” responded many happy onlookers. “This is the first time fan outrage seems to have worked on DC,” noted one commenter at The Mary Sue.

The news also gave rise to a mini-meme on Twitter, as fans reacted to Simone’s phrasing of her own firing/rehiring as though she’d been replaced by another writer named … Gail Simone.