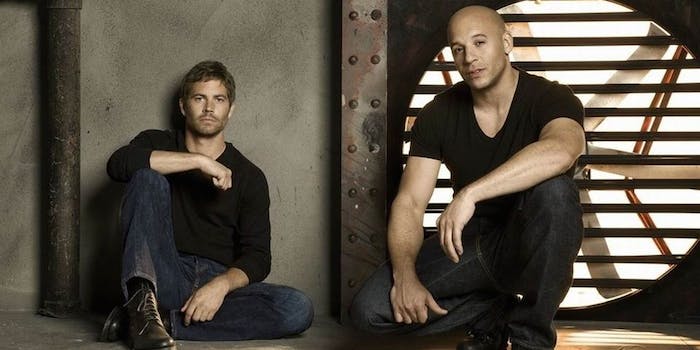 Will ‘Furious 7’ bring Paul Walker fans and Vin Diesel the closure they need?

'To live in the hearts we leave behind, is not to die.'

“To live in the hearts we leave behind, is not to die.”

Walker’s death resulted in a significant retooling of Furious 7—the latest installment in the series, opening this weekend. Since filming was not yet complete, Walker’s brothers, Cody and Caleb, as well as an additional actor, stood in for him. Director James Wan (The Conjuring) also used a reasonable amount special effects to finish the film. Amid the chaos and wreckage in Furious 7, the film is reported to pay tribute to Walker in its final moments, giving his character, Brian O’Connor, one last ride.

Hopefully this will be enough to bring Vin Diesel, as well as many of Walker’s fans, some sense of closure for their loss.

In the year since Walker’s death, Vin Diesel’s made no secret of his grief, expressing his sadness over Facebook, which is usually his platform for inspirational quotes. The posts range from unbearable sadness to appreciation, suggesting that Diesel has worked through the stages of grief. There’s is no one way to deal with grief. Some people withhold emotion, while others let it all out through public expressions of grief, such as with social media.

While Vin Diesel suffered a very personal loss with Paul Walker’s death, he shared grief with nearly 90 million people. Although 90 million individuals probably didn’t collectively mourn Paul Walker, Diesel still reached out to form a support system among his fans. Celebrities, in particular, are so present in public consciousness that when one dies, fans who have never met them can feel that sense of loss; maybe they’ve identified with a particular body of work or just simply feel like they’ve gotten to know them throughout their public careers. When fans can share that grief with a star like Vin Diesel, who had a close, personal relationship with the deceased, they are able to navigate through the stages of grief without feeling isolated.

In addition to the public sense of loss, losing an actor during the production of a film or TV show puts pressure on the producers to complete the project (there’s still money on the line, after all) while also, in some way, paying their respects—either through a simple dedication or with a full-on tribute, as is the case with Furious 7.

Following the death of Philip Seymour Hoffman, Hunger Games: Mockingjay director Francis Lawrence reportedly did not use CGI to complete the late actor’s scenes in the two movies. Hoffman had completed the majority of his scenes before his death last year. Lawrence, instead, distributed his lines to different characters in two scenes in each movie. Mockingjay Part 1 is dedicated to Hoffman; there’s no special send-off for his character—not yet, at least. Mockingjay Part 2 is set for release this fall.

Saying farewell to a deceased actor and the role they play is much more common in television, as audiences grow more acquainted with the character and may require some sense of closure in the aftermath of their death. Most recently, the cast and crew of The Big Bang Theory shared their grief in a touching toast after the passing of Carol Ann Susi, who was the voice of Howard Wolowitz’s mom. Previously, Glee paid musical tribute to Cory Monteith, who died unexpectedly in summer 2013. The episode, titled “The Quarterback,” focused on the death of Monteith through his character, Finn (whose death is not explained), and how his friends are dealing with their loss. Similarly, John Ritter was memorialized after his 2003 death during the filming of 8 Simple Rules on ABC. Phil Hartman also left a major void in NBC’s Newsradio after his 1998 murder.

I’m going to see Furious 7 this weekend ready to have my heartstrings pulled.

As an audience, however, we become spectators of grief. “There is something very poignant and very captivating about reading or hearing about somebody else’s loss, but this trend also shows the level of public expression that grief has reached today,” says Ruth Davis Konigsberg, author of The Truth About Grief. Indeed, with social media and the resulting “share everything” culture, we can’t help but witness the grief of others. And when a celebrity dies, somebody everyone feels like they know, that spectatorship is magnified but also demands participation.

I’m going to see Furious 7 this weekend ready to have my heartstrings pulled (and pumped with adrenaline). I was never the biggest Paul Walker fan until Fast Five—the film that catapulted the franchise to the top of my favorites list—yet I can’t imagine the series, Tokyo Drift notwithstanding, without him. But with Vin Diesel teasing an eighth Fast & Furious, we will find out soon enough.

It feels like Diesel has found closure through his grieving process—paying the ultimate tribute to Walker by naming his newborn Pauline. His Facebook posts are less mournful, and, in fact, seem celebratory of Furious 7’s release, of Paul Walker’s life.

Speaking to the fans who mourned with him, Diesel promises, “I know together, we have made Pablo proud.”