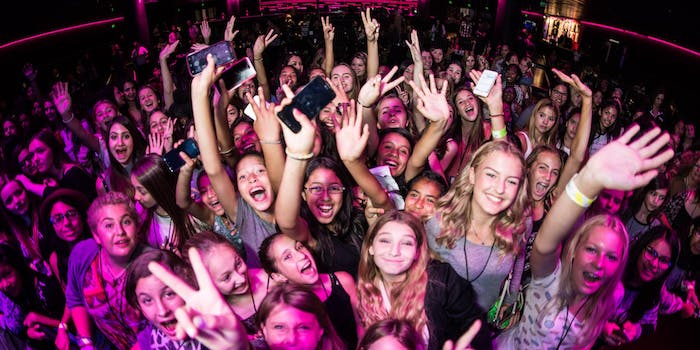 The Girls Night In brand of girl power, gossip, and fun might be the modern answer for a teen magazine.

I was around 10 when I started reading Seventeen magazine.

Clearly I was younger than the namesake age for the publication, but I wasn’t truly outside its demographic. By the time I was 17, I was reading college guides and dipping my toes in Cosmopolitan. Seventeen provided the training wheels for me to learn how to be a teenage girl. I could avoid all the embarrassments of those “It Happened to Me” columns if I studied them hard enough. No dropped tampons in homeroom, no getting my braces stuck to some boy’s braces during a first kiss. I’d master the art of the grown-up girl slumber party. I’d become the model teen by osmosis, and ahead of my time.

Teen magazines still thrive, but teen and young adult digital influencers have supplanted them as the go-to for advice and tips to shape tweens into full-fledged teens. Nowhere is that on more display than at Fullscreen’s Girls Night In, an 18-city tour featuring a combined social power of more than 14.4 million subscribers among its six female headliners.

While other events for digital stars, like DigiTour or VidCon, are flush with female fans, Girls Night In was exclusively so. Usually the YouTube star dynamic showcases the screaming female fans obsessed with attractive young boys, both gay and straight. On other tours, there’s usually only a small percentage of female creators alongside the boys, but at the Los Angeles Girls Night In stop, only the second on their trek, the only men in sight were two band members accompanying musician Andie Case and a motley crew of dads and industry players wandering around the empty back bar.

Everywhere else you looked were girls. Young girls, too: Some were as young as 8 with most hovering around 12. After Case opened with a musical set, the remaining five girls appeared on the bedroom-themed set for a scripted bit about their joint sleepover and set up the context of the show through video clips: Eva Gutowski, Meredith Foster, Sierra Furtado, Alisha Marie, and Mia Stammer were tasked with saving the whole Internet by creating and uploading the five best videos they could before morning. That meant staying up all night, and pulling up ever-younger fans to help them go through a series of challenge videos like the smoothie challenge (in which one team choked down a concoction of anchovies, lemon juice, and chocolate milk) and a lip-reading challenge, where they tried to decipher what another girl was saying while listening to incredibly loud music on headphones. It’s the bread and butter of YouTube, acted out live for a more-than-willing crowd.

“I wanted the show to be inspiring and have a storyline,” Gutowski told the Daily Dot. “I wanted it to be really true to the videos we do on our own channels. I didn’t want it to just be a variety show. I wanted an overall arc of positivity and girl power in general. In this day and age, the Internet is so big, and it could be a really happy place, and we want everybody to know that.”

The Girls Night In brand of girl power, gossip, and fun might be the modern answer for a teen magazine.

The women of Girls Night In are post-teenagers who spent part of their young lives building a following on YouTube. Now they’re some of the platform’s biggest success stories, and the rapt attention of their fanbase proved it, even if that fanbase felt smaller in person than their social numbers would indicate. The Los Angeles venue of Club Nokia felt underattended, although that speaks as much to the choice of venue as the attendance numbers: The tour is intended to feel intimate, and the crowd of girls in attendance had bellied up as close as humanly possible to the stage to stay within selfie range of their favorites.

With the world saved, the night circled back to the opening sketches and a celebratory karaoke singalong on a CD player karaoke machine the girls on stage called “old.” The underlying message of the night was girl power, the ability to be whomever and whatever you want to be if you put your mind to it—especially if what you put your mind to is YouTube stardom. “A simple YouTube can inspire so many people,” the girls shouted from the stage. “What makes you different makes you beautiful!” These rallying cries have turned individuals uploading videos from their bedrooms into household names for the tween set in a few short years.

“Our demographic is so broad, we reach so many different age groups,” said Foster. “A lot of them are in middle school and going through that. I think being able to give them advice is kind of like being an older sister to them. We’re all helping them, and we’re all having so much fun with them.”

The Girls Night In brand of girl power, gossip, and fun might be the modern answer for a teen magazine, but instead of those tips of the trade being spouted from a New York publishing company, girls today are getting it directly from their idols’ mouths. With tours like this one letting the creators leap from the screen to the stage, the connection between tween and idol can only grow stronger.

“It’s nice to show them that we’re people just like them,” explained Gutowski. “It’s really rewarding to be able to show people who are going through puberty or going through growing up, to show them someone older they can look up to and think of as a positive role model.”

Update 12:26pm CT: After a last-minute shuffle, Sierra Furtado is the last guest on the lineup, not Meghan Rienks.