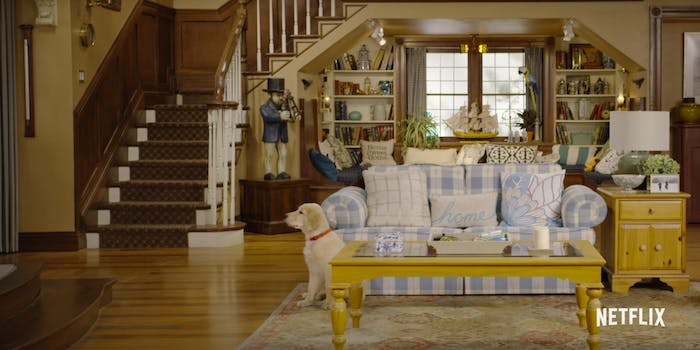 The first ‘Fuller House’ trailer is here and nothing has changed

The whole gang is (mostly) back.

Our first look at Fuller House, the Netflix sequel series to Full House, is finally here and practically nothing has changed.

It’s less of a tease and more of a capsule look at the old San Francisco home where the Tanners resided more than 20 years ago. The kids have all grown up by now and Comet is most likely gone, but the house has stayed the same as D.J. prepares to move in—presumably in part because San Francisco is expensive for a newly single mother. (There’s not even a spare laptop or a tablet lying around to show that it isn’t the ’90s anymore.)

We don’t see any of the old cast members (and we haven’t learned what Fuller House will do about the Michelle-sized hole), but those familiar catchphrases are still there—and the new dog is certainly excited to welcome everyone home. But will nostalgia alone be enough to carry it?

All 13 episodes of Fuller House will debut on Netflix on Feb. 26.