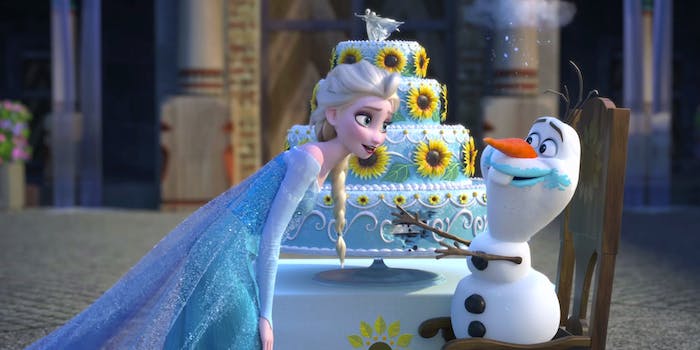 We just can't let it go.

In what’s probably the least surprising bit of news ever, Disney has confirmed that it’s making a sequel to the megahit Frozen at Disney’s Annual Meeting of Shareholders Thursday.

There’s not much information available on the sequel beyond the return of director Chris Buck, director and writer Jennifer Lee, and producer Peter Del Vecho.

“We enjoyed making Frozen Fever so much and being back in that world with those characters,” John Lasseter, the chief creative officer of Walt Disney and Pixar Animation Studios, said in a statement. “Jennifer Lee and Chris Buck have come up with a great idea for a sequel and you will be hearing a lot more about it and we’re taking you back to Arendelle. We are so excited about that.”

There’s no release date or any production details about the film, but that won’t stop people from getting excited about it—including star Kristen Bell, who is likely returning as Anna; Idina Menzel has yet to publicly comment on the news, although she confirmed that a movie was “in the works” back in November.

With almost no information to work on, people are at a mix between pure excitement and wanting Disney to just let it go already; it’ll probably also get another song stuck in our head for months. But Frozen, which made the company more than $1 billion and is the highest-grossing animated feature of all time and gained two Oscars, is unlikely to do the latter. Regardless, people have been trying to figure out what Disney could call the movie other than Frozen 2 in a hashtag game started by BuzzFeed.

Frozen 2: Olaf Gets Hella Dark In This One #FrozenSequelTitles pic.twitter.com/poGwVNxaI5

#FrozenSequelTitles Frozen 2: Elsa And The Search For More Money

Frozen Fever, the animated short set to play before the live-action Cinderella, will come out Mar. 13.