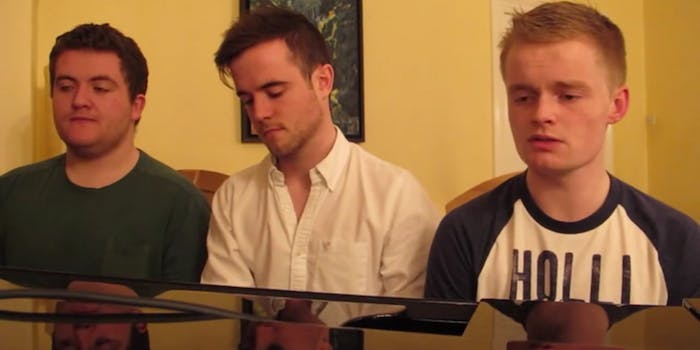 Is this the saddest version of the ‘Friends’ theme song ever?

Nostalgia is a hell of a drug, and we’re currently in the throes of some heavy ’90s hindsight. As such, three Irish musicians (and, hopefully, friends) recently decided to cover the Rembrandts’ “I’ll Be There for You,” originally recorded by the Rembrandts.

The original will certainly take you back that time you tried to do the Jennifer Aniston haircut. It’s meant to be an uplifting song. These three pals’ version, however, is pretty depressing.

The opening notes of the cover, played solely on the piano, almost sound like the opening of Journey’s middle-school dance anthem “Faithfully.” From there, the three harmonize beautifully, slowing down the track to a funereal pace. I could see this song opening a new CW show, or maybe an episode of Girls.

Ronan Scolard, one of the dudes in the clip, has other covers on his YouTube page, including this acoustic version of Frank Sinatra’s “That’s Life.”