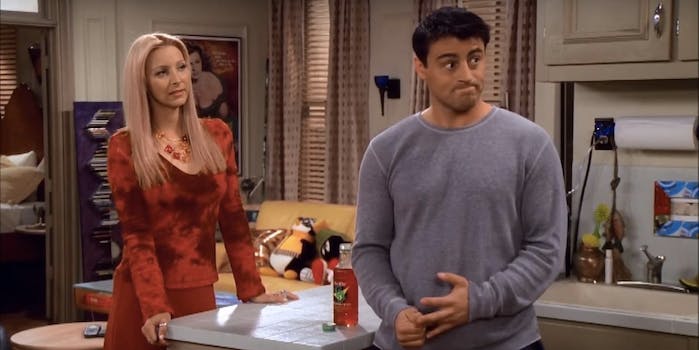 Ross's capabilities as a father are just the beginning.

Ever since Friends hit Netflix earlier this year, more people have started to realize that Ross Geller isn’t exactly a nice guy, but could that have cost him one of the most important people in his life?

It appears so, according to D.F. Lovett. Back in August he came up with a theory centering around Ross that’s just as dark as the one where Phoebe Buffay is a meth addict. He recalled that Ross’s son Ben with his ex-wife Carol used to be an important part of Friends, but after the eighth season Ben was never seen again—although he was mentioned six more times over the course of 54 episodes. And despite once being part of Ross’s life, Ben never even met Emma—Ross’s daughter with Rachel Green—onscreen.

The circumstances behind Ben’s disappearance led Lovett to wonder if Ross had actually lost custody of his son.

Lovett outlines Ross’s history of homophobic comments, his manipulative and emotionally abusive nature, his mocking of Joey Tribbiani and Phoebe, how shitty of a professor he is, and how his jealousy makes him “completely unhinged.” The homophobic comments in particular could be a breaking point for Carol, who discovered she was a lesbian prior to the show’s start and later marries a woman; she might not want that kind of toxicity in Ben’s life, and it’s questionable if Ross would fight for Ben if faced with that situation.

But Ben’s disappearance could also point out to something more depressing: Ross might also be a terrible father.

People like to give Ross the benefit of the doubt, wondering if perhaps he was a better father off-screen. Perhaps his children met but the audience never saw. The more likely answer is that he was such a deadbeat father that he completely faded away from his son’s life, pretending to his family and so-called friends that he still saw a boy he barely knew.

While a rather straightforward sitcom like Friends doesn’t seem like the sort of fodder that would spark pages of fan theories spanning years, it’s the show that ever prevails. From the mundane or plausible to the downright absurd, we’re going deep down the rabbit hole to find just what else we don’t know about Rachel, Monica Geller, Phoebe, Chandler Bing, Joey, and Ross.

And just like Ross’s status as a deadbeat dad and Phoebe’s possible addiction, it might not be pretty.

During season 7’s “The One With All the Candy,” Rachel told Monica that she doesn’t sleep with guys on the first date. Being a good friend, Monica instantly cites multiple instances where she’s wrong.

It’s a throwaway line, so we actually never meet any of these men. But one of them has the same name as a character from the beloved Parks and Recreation, which aired on NBC years after Friends ended.

Any namechecking here is probably unintentional, but one person who did the math figured out that Rachel and Ben could’ve possibly dated: When the episode aired, Rachel was 29 while Ben would’ve been 26.

“I think at some point after Ben left Partridge, Minnesota in shame after his failure as mayor, he went to NYC for a brief time, met Rachel, and either had a one night stand, or a relationship,” Phefflin wrote.

And if all else fails, use some butt logic: Rachel and Leslie both have a thing for cute butts.

2) The one where Phoebe is a genius

Phoebe is constantly seen as the kooky one, but she’s had a pretty rough life before the start of Friends; she grew up on the street after her mother killed herself. But with all of that, Phoebe is smarter than anyone ever gives her credit for.

She managed to learn French and Italian without attending high school, convinced Ross that evolution is flawed, and even notes how she’s “more than just a pretty blond girl with an ass that won’t quit.” And she’s not afraid to hurt someone’s feelings by showing just how privileged they are.

In the season 7 episode “The One With Ross’s Library Book,” Rachel and Phoebe try to find the perfect woman, Erin (Kristin Davis), for him. He initially doesn’t see it, but they convince him to go on a second date with her, only to reveal that she’s not really interested either. It all ends with Rachel offering to make Joey pancakes as an attempt to cheer him up.

Now, one redditor believes that entire subplot sailed its course just so that Joey could get someone to make him pancakes, and the evidence is pretty convincing. Joey loves food, can’t cook, he was on TV again so he could have the money to get Erin to go along with the scheme, his proclamation of “Finally” seemed like more than just based on his obsession with food, and Joey’s sensitivity was never addressed again.

4) The one where Monica developed OCD as an adult

When Monica was younger, she wasn’t anywhere near as obsessed with cleaning and organizing as she is as an adult, which leads some people to believe that came after she was no longer overweight.

It’s never addressed in any of the show’s flashbacks, in which we see a heavier Monica. And in the alternate reality two-parter “The One That Could Have Been,” a still-fat Monica doesn’t seem to have those same tendencies, instead appearing much more relaxed.

LeBlanc plays an exaggerated version of himself on Showtime’s Episodes, but the basis of that character comes from another source: Joey.

We’re not sure if this is trolling, but basically Joey and LeBlanc would exist in the same universe, with the former being aware of the latter. That portrayal on Episodes would then be how Joey would imagine LeBlanc portraying LeBlanc’s exaggerated version of himself.

Yeah, our brains hurt too.

Central Perk was located in a busy neighborhood and was usually packed, but how did the gang always get the same table?

It was probably done by Gunther, the manager of Central Perk who was always there but rarely ever included within that group of friends. But it might not have just been a formality. Gunther had a years-long crush on Rachel, showing jealousy towards the various men in her life and even refusing to serve some of them; Rachel thought Gunther was gay. He could’ve saved everyone’s table so he could see her more often.

7) The one where Jack Geller isn’t Monica’s dad

It was no secret that between Ross and Monica, the former was clearly their mother Judy’s favorite. But it could’ve been because of something she couldn’t control.

There’s no real evidence from the show to support it, but one theory claims that Judy actually had an affair with someone (who probably wasn’t Jewish), resulting in Monica. If that’s true, it would explain both why Judy resented her and why there wasn’t as much emphasis on respecting her Jewish heritage.

8) The one where Friends never actually happened

The idea that a show was a dream or was all in someone’s head is a common TV trope; Community even went meta had a character try and convince the Greendale Seven it actually happened. But a couple of theories touch on scenarios where the Friends universe doesn’t exist.

In one, Friends is what everyone imagines their life would be while they’re still in high school. They each are able to fulfill their dreams as Ross gets his Ph.D., Rachel becomes independent, Monica loses weight and becomes a chef, and Phoebe is able to rise up from her dark past. It’s all cheery and mostly ends happily, but it’s not real.

On the other hand, they could’ve all been patients in a mental asylum all this time, with Central Perk representing the cafeteria and Monica’s apartment as everyone’s room, pushing out anyone who could threaten that core dynamic.

9) The one where Friends, Seinfeld, and Mad About You are all in the same universe

Friends, Seinfeld, and Mad About You were all NBC sitcoms that aired roughly around the same time, which allowed for a series of crossovers (and at least one head-scratcher).

Phoebe’s twin sister Ursula (both played by Lisa Kudrow) showed up as a server at Riff’s, a diner in Mad About You.

Then Mad About You’s Jamie (Helen Hunt) showed up at Central Perk—and even thought that Phoebe was Ursula.

And then Cosmo Kramer (Michael Richards) from Seinfeld moved into Paul from Mad About You’s apartment, who references the comedian who lives across the hall.

With Courteney Cox appearing in Seinfeld and George Costanza (Jason Alexander) seen watching Mad About You while in bed, the theory has a few holes, but it mostly checks out.

Also, all three of those shows are part of the Tommy Westphall universe, so good luck unraveling how everything else is connected.