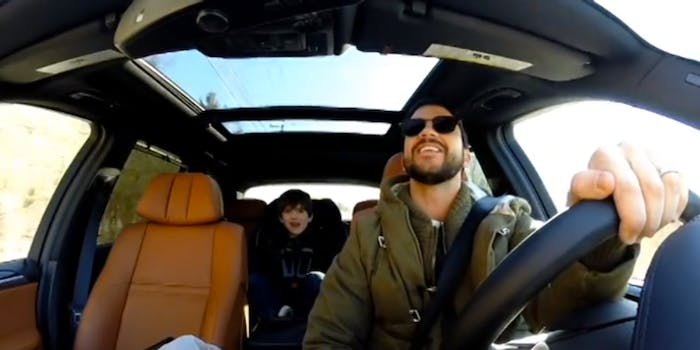 In this new YouTube series, a gay dad drives his 4-year-old son around

The first episode is all about first kisses, unibrows, and the practice of sharing cookies.

The conversations parents have with kids in the car can be fodder for viral YouTube videos, but there’s certainly room for a more nuanced approach. Enter Frank Lowe.

Lowe is a parenting writer for The Advocate, and tweets very humorous things under the handle @GayDadAtHome. Last week, he asked his followers if they’d like to see a YouTube show featuring him and his four-year-old son, Briggs. Inspiration apparently took hold, because Lowe released the debut episode on Monday.

Driving Mr. Briggs is a single-shot weekly series, in which Lowe drives around and has conversations with Briggs, who already seems wise beyond his four years. The first episode is all about first kisses, unibrows, and the practice of sharing cookies.

Lowe wrote about “taking over YouTube,” and how he hopes the show will inspire other gay men and women to start families:

I often get tweets from gay youth saying that I’ve inspired them to be a parent one day, and that melts my heart (bitter as it may be). I also get tweets asking for more—whether it be more frequent pictures on Instagram or even that we get on a reality show. I think people like to see that “it gets better” is not bullshit, and I’m happy to prove this right.

How soon before Briggs is hosting his own show?