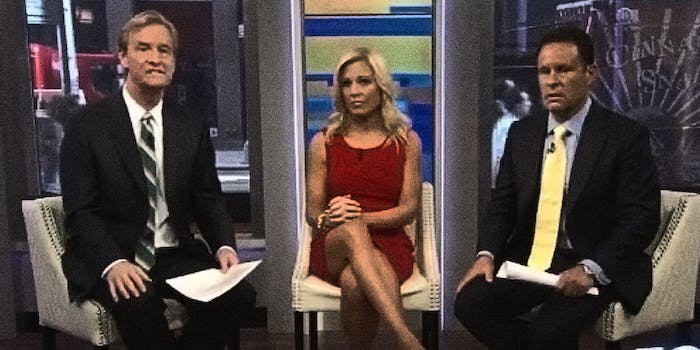 It's almost as if they don't know they're on camera.

Yesterday morning, disturbing footage of Ray Rice assaulting his then-fiancee, Janay Palmer, was released by TMZ. And the flapping gums at Fox & Friends wasted no time mocking the incident.

More specifically, the hosts blamed the victim, Palmer, for still marrying Rice after the incident. After reading viewer tweets on the video, Steve Doocy and Brian Kilmeade discussed how Rihanna also went back to Chris Brown after he assaulted her, and what a terrible message that was.

“I think the message is, take the stairs,” Kilmeade said.

“The message is, when you’re in an elevator, there’s a camera,” Doocy shot back.

People have been calling for the hosts—third host Anna Kooiman giggled during this awkward exchange—to be fired or suspended.

When will @foxnews fire or suspend @kilmeade @sdoocy and @annakooiman for mocking the ray rice beating? http://t.co/ivT0RDiRhn #Disgusting

The channel couldn’t get their opinions on Ray Rice out fast enough: Fox News contributor Ben Carson said today that we should stop “demonizing” Rice, and that his wife knew he had issues and married him anyway.

Fox told Washington Post writer Erik Wemple that it will address the comments on today’s show. It’s almost as if these men don’t know they’re on camera, or what a “terrible message” is.