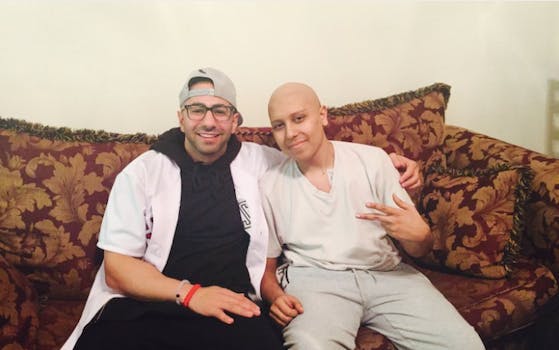 He's helping him start his own vlog, and save money for college.

While many YouTubers launch funding campaigns for their own projects, YouTuber Yousef Erakat decided to lend his fame to help a sick fan in need.

Erakat, known to his 4.8 million subscribers as fouseyTube, met the sister of Mahmoud Badran at an event. Badran was recently diagnosed with Ewing’s sarcoma cancer, a rare bone cancer, and his sister told Erakat how his condition made it unable for him to attend the event himself.

Erakat paid a home visit to Badran and the two bonded over FIFA and the fact that Badran had his own ambitions to become a YouTuber. Since Badran didn’t have the right equipment or extra money to buy what he needed, Erakat surprised him with a fundraiser aimed at making his dreams come true, both for YouTube and college.

Erakat secretly launched an Indiegogo campaign and announced it on his channel to raise $10,000 for Badran. Of that, $3,000 would go toward the equipment Badran needs, and the remaining $7,000 for his college fund. If fans meet that amount, Erakat will make a personal donation to The American Cancer Society. Anything above the goal will be split between Badran and the ACS. All the YouTube proceeds from the announcement video will also be donated to charity.

Additionally, Erekat created a skeleton YouTube page for Badran and encouraged his followers to subscribe there to kickstart his dream of sharing his life on the platform. In two days, Badran has more than 66,000 subscribers and 120,000 views on his first video on the channel.

The campaign has raised over $7,000 in just two days and will remain open until March 10.