When Jeff Neubauer took the Fordham men’s basketball coaching job in March of 2015, his wife, Karen Neubauer, seemed excited and apprehensive. She blogged about their trip to New York when he interviewed for the job. In her writing she isn’t shy about expressing her feelings, whether she’s happy or disappointed and whether she’s giddy or angry.

But, not unlike the latest album from Beyoncé, she’s now accused her husband of cheating on her, and she recently began to unload on him via her Twitter account for the entire sports world to see. 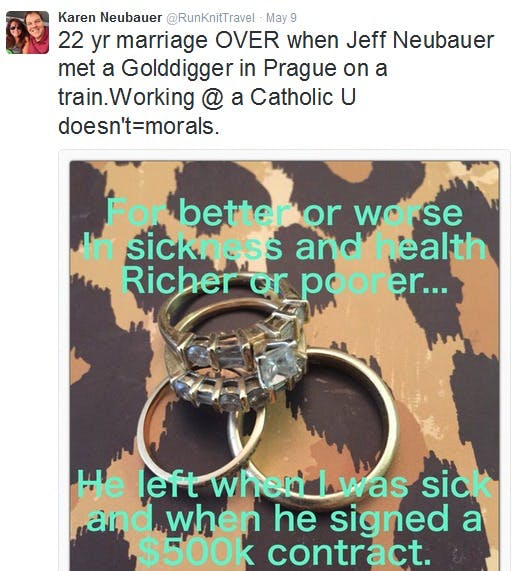 While Karen Neubauer unleashed her venom earlier this month—the news broke in a major way Tuesday—her Twitter account, which featured less than 1,000 followers before her tweets went viral and was made private Tuesday, has been hinting at Jeff Neubauer’s supposed infidelities since March.

Neubauer led the Rams in his first—who hadn’t had a winning record since the 2006-07 season—to a 17-14 record that included a school-record 14 home victories. That resulted in a contract extension and, apparently, a $500,000 raise.

But he also proceeded to upset his wife—she alleges he cheated on her while on a trip to the Czech Republic—and her Twitter journey since March is uncomfortable and heartbreaking. 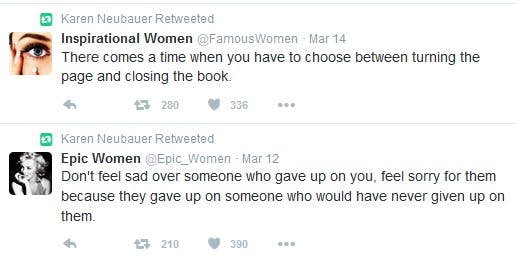 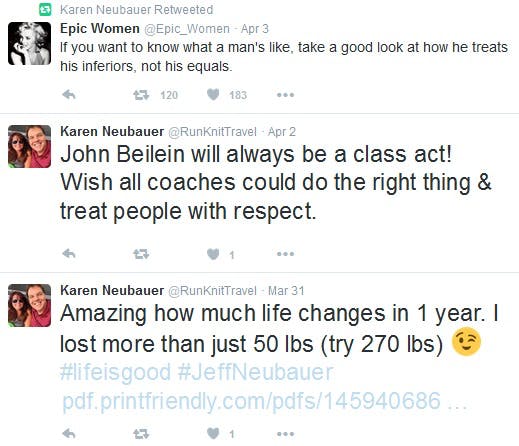 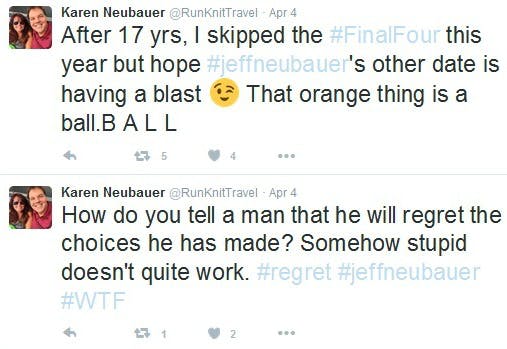 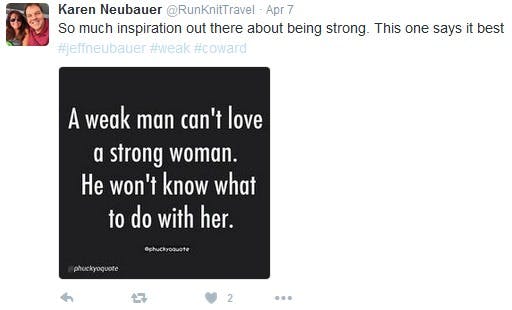 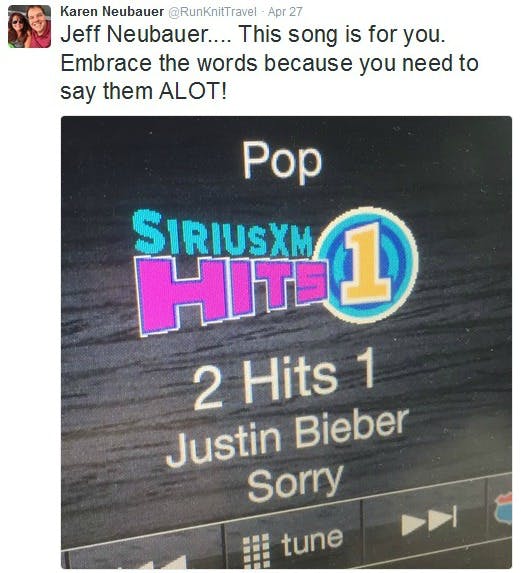 A Fordham spokesman declined to comment to the Daily Dot, saying the school doesn’t talk about its employees’ personal lives. Karen Neubauer didn’t respond to a Twitter message left by the Daily Dot.

But it sounds as if she’s been unhappy for quite a while. As she wrote on her blog in January:

The husband forgets what a pivotal role his wife plans in his success. I have made five moves and I can’t think of one time that my husband ever was present for a move. He never had to deal with the packing, prepping the house, selling the house, unpacking on the other end. He literally just changes his shirt and it is the wife that is left to “clean up” the place he abandoned. It is the sacrifices that the wife makes that is what gets him to reach his success. A wife gives up a lot to move her husband forward in his dream. It is his dream that becomes your dream whether you want it to or not. This is hard to swallow sometimes because it makes you think your dreams don’t matter in life because it is all about him.
Today represents a start of a new year for me. Turning a year older tends to make you rethink your priorities and not want to put off doing things. For 21 years my husband has been my priority. Well it is time for a change. I am excited about the new year and all the new adventures. I have 15 pounds left to lose and have never felt better about myself. Nothing will stop me now. Time to put me as the priority because heaven knows my husband hasn’t. It gets depressing every time I see his priority list and I’m like number 7 on his list with the first 6 being all basketball related.

It’s unfortunate this has happened to the Neubauer family. It’s doubly unfortunate that this is playing out online for everybody to see.