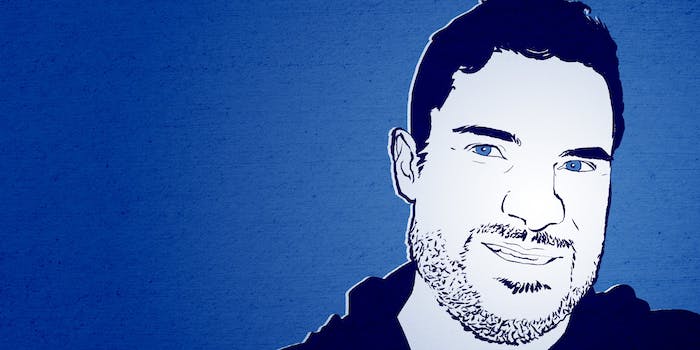 Flula Borg on his new comedy ‘Buddymoon’ and love for yogurt

The YouTube comic and 'Pitch Perfect 2' standout is just warming up.

“Even at a pool party I don’t know how to describe what I am doing,” the German comedian and reluctant YouTuber tells the Daily Dot over coffee in Los Angeles. He’s not in full character, but he is wearing a fanny pack with a straight face. “Usually I lie. I say I’m an editor. … I enjoy when things are confusing.”

Borg’s media presence is certainly confusing. It could also be described as side-splitting hilarity. Borg might be widely known as the leader of Das Sound Machine in Pitch Perfect 2, but his 771,000 YouTube fans clamor for his Auto-Tune gags and irreverent celebrity interviews. Now he’s likewise an independent filmmaker with BuddyMoon, a comedy he self-funded with friends David Giuntoli and Alex Simmons.

Giuntoli has gone on to fame via NBC’s Grimm, and Simmons is an Emmy-nominated documentary filmmaker. They decided to team up to tell the story of two friends who embark on an Oregon camping trip after one’s marriage disintegrates.

“We always wanted to make something, and we were always all busy,” says Borg. “We found 10 days in the summer when we all had free time, and we knew if we didn’t shoot those 10 days this movie wouldn’t exist. And we were right, because we haven’t been all together more than one day at a time since.”

The structure of the film is half scripted, half improvised, building on their established friendships.

“We knew the plot, and kind of the points, but then Alex our director would write a loose script the day before the shoot, and we would improvise,” Borg says.

The trio first met as roommates, when Giuntoli invited Borg to visit and he never left. They found Simmons via Craigslist.

“Not casual encounters, just roommates,” explains Borg, who says he just needed someone to, “have enough dollars and be pretty sanitary. Just don’t be very, very strange, but even that’s OK as long as you can pay the rent.”

The film has gone on to play festivals, winning the SlamDance Audience Choice Award at Sundance, an honor that Borg calls “unexpected.” Crossing between the realms of digital and traditional is easy for Borg, who considers himself an “accidental YouTuber” in an age where that’s become a viable career choice.

“It was an easy way to share a video,” he explains. “I’d write a terrible techno song about poodles and I could send the link to my friends. Five years after I uploaded it, it was on Reddit. I realized I should do more videos—as a homework assignment every week I will make a video.”

He’s a performer who loves to play in the sandbox, sure, but says he feels no pressure to do YouTube “right.”

“With YouTube, I can upload whatever I like,” he says. “I’m not a huge star, so there’s no pressure. If there’s no views, I don’t care. Next week there’s something new anyway. If it’s a weird brand deal about cows, great. I’m excited, I love cows. I love yogurt, let’s do it.”

Because, as Borg puts it, hiring him for a role in a project “isn’t going to bump the box office numbers,” he can be confident that his work is being recognized for talent, not just the digital sheen that has started to cloud Hollywood. His ambitions moving forward are varied. He’s promoting a charity album about animals, planning tour dates for the fall, teaming back up with Simmons for another indie project, and capturing as much weird comedy on film as possible.

“I decided to make a movie for Sundance, but I didn’t write it yet,” explains Borg. “So as I drove to Sundance I wrote, edited, and scored a movie. I had a documentary crew follow me. I decided to make a western since I am driving up the West. And as you can tell, I am very good at southern accents.”

The film, Johnny Fist, and the corresponding documentary, had a successful Indiegogo campaign last year. He’s debating how to distribute the project, and whether to make it a series or film.

Borg may not know how to describe himself, but he does know what he wants. It kind of makes sense:

“I want to play a bad guy in a James Bond film,” he offers. “I want to be in a new Die Hard movie. I want to do fun, random things. There are probably 12 things I am pitching, at all the different stages. It’s a great problem if four of them happen at the same time, but they won’t. It’s usually whatever just happens next.”

Buddymoon is playing in select theaters nationwide, and is available on iTunes.