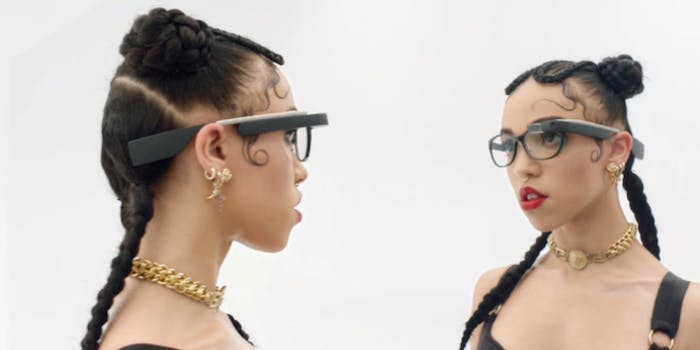 FKA Twigs proves you can do cool things with Google Glass

Through the looking glass.

While some people are blaming Google Glass for shattering their lives, others are finding creative uses for it. Singer FKA Twigs just debuted a concept film in collaboration with Google Glass, titled #throughglass.

The singer, who was recently the target of Twilight fan rage, created and directed the short clip, which includes fragments of her songs “Glass & Patron” and “Video Girl.” She meets lookalike versions of herself in the video’s white space, as FKA Twigs commands their performances through Glass. Perhaps it’s a commentary on the many online identities we create.

She might be the first person to actually make Google Glass look interesting, and highlight the creative and artistic potential of the technology. Perhaps this will create a shift from Glass’s usage among the tech elite to the artistic sphere. Perhaps Google’s trying to change Glass’s image. This is a good start.