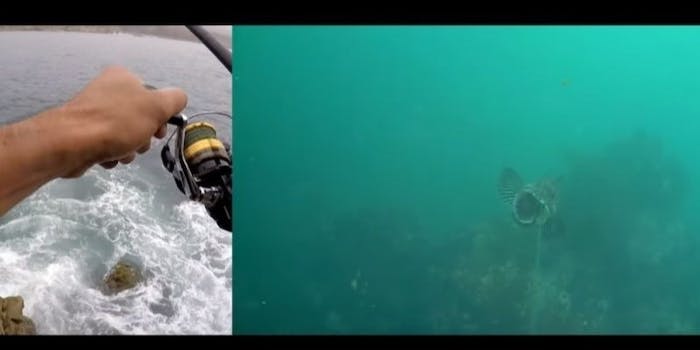 The fish goes for quite a ride.

After four years of producing videos that show viewers the best tips and tricks to catch fish and then eat them, the Fisherman’s Life YouTube channel is letting you in on a secret: Fishing with an underwater camera looks pretty darn amazing.

The YouTuber behind the channel, Matt Withans, figured it would. “Honestly, I’m kind of reluctant to make this video,” Withans says in a video posted Saturday. “If you guys see this underwater footage that hopefully I get, you’re going to catch a lot more fish—a lot more lingcod—which means there’s going to be a lot less for me.”

Before he casts his line, Withans, who has 538,000 YouTube subscribers, explains that he added an underwater camera onto his 30-pound fishing braid while also adding extra weight to the camera so that the lens would remain angled toward the bait trailing behind it. After double checking his knots, he casts out to see what he can find.

A seal checks out the bait before the YouTuber’s camera gets snagged a few times on what appears to be seaweed. With each subsequent cast, you can see the interest the bait draws from a variety of sea creatures.

Finally, he lands a good-sized rockfish.

Here’s the entire video, but be forewarned: From the 7:00 mark until about 9:15, the YouTuber shows himself bashing the fish’s head with a rock to knock it cold before he begins the process of prepping it for lunch, which includes bleeding the fish and showing the fish’s beating heart (also, if you think fish prep footage will make you squeamish, it’s probably best to avoid between 11:30 and 13:00).

Eventually, Fisherman’s Life returns to the sea, and Withans finds a lingcod that latches on to the bait. The fish gets taken for a ride before it’s pulled out of the ocean.

As the YouTuber writes in the video description, “Notice how both fish immediately try to dive into a rock once they are hooked. That’s why I always recommend tightening your drag almost to the max. If you’re using 30lb Test line tighten your drag all the way down to about 20lb drag if your reel can handle it. Also notice how both fish ambush the swimbait coming out of nowhere. Very opportunistic and predatory fish.”

Yet, for every predatory fish, there’s usually a bigger, smarter predator that will trick them into becoming the prey. In this case, the fish’s consolation prize to being caught was that he got to become a brief YouTube star. It just didn’t live to tell the tale.