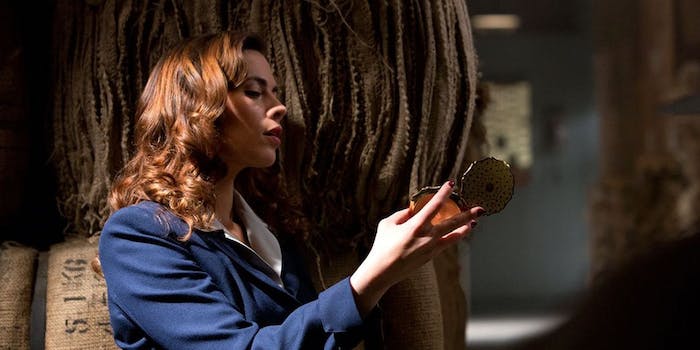 With Agent Carter, Marvel is going for a very retro dynamic.

With Agent Carter, Marvel Studios has successfully made a bunch of superhero fans fiendishly excited about a post-war spy drama.

With the new Marvel series’ January debut less than two months away, the first promo clips are now beginning to surface online. The latest clip, which aired on TV last night during a documentary about Marvel comics, sees our hero Peggy Carter in a suitably clandestine meeting with Howard Stark. Stark’s butler Edwin Jarvis (the inspiration for J.A.R.V.I.S. in the Iron Man movies) also makes his first appearance, giving us a charming insight into his character: he’ll help Agent Carter anytime before 9pm, when he and his wife go to bed. Very sensible.

Agent Carter takes place a few years after the first Captain America movie, with Peggy Carter (played by Hayley Atwell) frustrated by the dull administrative work she ends up doing after World War II ends. Carter begins working with Howard Stark on the side, and the pair of them eventually create what will later become S.H.I.E.L.D. The first season will be a single eight-episode story arc, designed to fit into the mid-season break of Agents of S.H.I.E.L.D. It will also tie in with the rest of the Marvel Cinematic Universe as a kind of historical origin story for many aspects of the Avengers franchise.

This promo clip sets an interesting tone for the rest of the series, which was already very different from Agents of S.H.I.E.L.D. The show’s aesthetic is similar to the sepia-hued 1940s scenes in both Captain America movies, and Marvel is clearly going for a mid-20th-century espionage vibe. As the series unfolds, Peggy Carter finds herself in a classic role: a spy who is isolated from her colleagues (in her case, partly due to 1940s workplace sexism) and doesn’t know whom to trust.