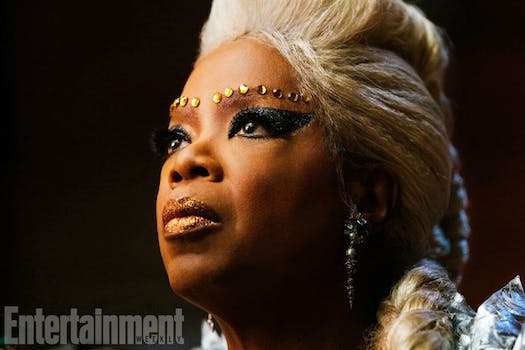 First look: Ava DuVernay’s ‘A Wrinkle in Time’ ushers in a new, inclusive brand of sci-fi

On Wednesday, Entertainment Weekly released the first images from the upcoming Disney adaptation of A Wrinkle in Time, and the internet is here for Oprah’s bedazzled eyebrows. Photos of Reese Witherspoon, Mindy Kaling, and Chris Pine also caught everyone’s attention.

Oprah serving LOOKS in @ava's 'A Wrinkle In Time' ✨ pic.twitter.com/ZbPZnC8PY2

When I tell y'all how excited I am for @ava's #AWrinkleInTime. MAN!

If you’re not familiar, A Wrinkle in Time is a science-fantasy novel written by Maeleine L’Engle in 1963. As its name suggests, the book and upcoming film include some mysterious multi-dimensional, space-time bending when lead character Meg goes on a search for her missing father. In the film, the characters played Witherspoon, Kaling, and Oprah are mystical guides to Meg during her journey, which explains the cast’s otherworldly looks in the images.

Not only does the film include some big names, but it’s being directed by the award-winning director Ava DuVernay (Selma and 13th). DuVernay told Entertainment Weekly that she challenged herself to go beyond traditional limits when directing the film. “With these women, I wondered, could we make them women of different ages, body types, races,” DuVernay said. “Could we bring in culture, bring in history in their costumes? And in the women themselves, could we just reflect a fuller breadth of femininity?”

We’re now waiting for an official trailer, which DuVernay says is coming Saturday.