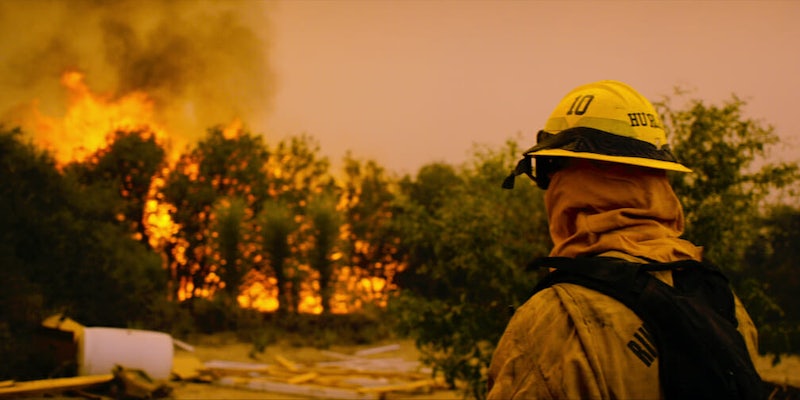 ‘Fire Chasers’ brings you right to the harrowing front lines

Over the course of four hours Netflix‘s new firefighting documentary series Fire Chasers takes audiences through a wildfire season. Alongside the Los Angeles Fire Department and Cal Fire, the filmmakers capture the enormity of the threat that California wildfires pose. There are stunning timelapse shots of fires burning around highways with cars driving by, almost creating a sense of frightening normalcy. Fire Chasers is about that threat, how we got to this point, and, most importantly, the people working to fight the new normal.

On its own the spectacle of the fires and the destruction they wreak is enough to recommend Fire Chasers. But the documentary draws most of its power from the people on the frontline.

Many of the firefighters, especially the younger ones still on probationary status, speak of firefighting as a higher calling. The reverence in their words and the excitement we see when they’re getting ready for a fight will sound unhinged to most people. But that air of fait accompli brings the whole endeavor into focus and everything makes sense. In any case of man battling nature, there is only ever one outcome over the long haul. We’re just trying to stave off the inevitable as best we can. Or rather, the men and women in Cal Fire and LAFD are. In the face a Sisyphean task, that sense of understanding goes a long way toward grapping with the motivation and perseverance.

When it comes to fighting fires, the list of variables is constantly evolving and it seems like every new wrinkle is working in favor of Mother Nature. Fire Chasers comes courtesy Leonardo DiCaprio’s production company, and the actor is an ardent climate change activist. Indeed the effect of climate change is real in the doc and exacerbates drought conditions. The effect of poor development decisions by humans exponentially increases the potential for catastrophic damage. Human carelessness with regard to camp fires, fireworks, and cigarettes creates unnecessary problems, too.

Fire Chasers features numerous interviews with people who live in the literal line of fire. There are people who have seen their homes go up in flames and lost everything. Other people who saw the fire come for them and were spared. There’s an old man who shows off his melted wedding ring as he describes escaping a fire. It’s terrifying. There is a woman who is angry that “they” haven’t found an answer to the fires that are a constant threat to her.

To find help push the stone up the hill, the fire departments have turned to an unlikely source: prison inmates. There is a program that allows non-violent offenders to volunteer. If they can pass the tests and training, they can help. This is were Fire Chasers finds its emotional component. Fire Chasers highlights two women from this program, Michelle Hedden and Bri Cody, to particularly strong effect. Both women suffered from addiction, but through the firefighter training program found a sense of purpose. Listening to each woman explain what the program means to her is affecting. They sound similar to the firefighters in the way they describe a sense of duty and pride in what they’re doing.

Hedden and Cody are redemption stories, yes, but they also bring home a larger point. In a battle against impervious forces, everybody needs to come together to find solutions. Even though the focus of the documentary is California, this is emblematic of issues across the globe as well. There is a point where some of the Cal Fire and LAFD chiefs go to South America to help with similar wildfire problems. It’s a reminder that few things break down barriers between people like a common goal or enemy. But how do you solve a riddle that’s constantly changing? That’s a question that Fire Chasers doesn’t have an answer for.

But what Fire Chasers does provide is hope that there will be people there to answer the call. When all the training we watch the rookie firefighters go through culminates with their first action, their excitement is palpable. Fire Chasers may be about wildfires and firefighters specifically, but it speaks to any weather-related event anywhere. With the battery of powerful hurricanes and tsunamis dominating headlines, Fire Chasers‘s subtext is as timely as ever.