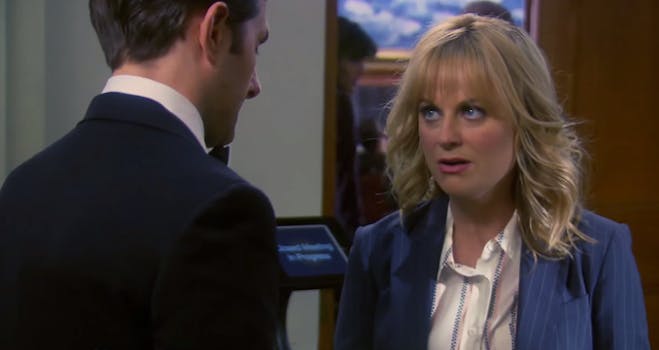 Much like the mafia, no one ever leaves Parks and Recreation.

As the final season of Parks and Recreation rapidly approaches, each new hint of what season 7 will bring is precious. TVLine handed out a healthy dose of Parks magic with their exclusive preview of the upcoming episodes.

“Pawnee brings everyone together and no one leaves, like the mafia,” Amy Poehler says of the beloved sitcom. “This show has been a gift in all of our lives,” Nick Offerman says genuinely.

However, the preview isn’t just emotional testimony from the cast. A few brief clips from the new season 7 episodes give some good insight into how things have changed for fan favorite Pawnee residents since the season 6 time jump. Here’s what’s happening.1) Andy loses his pants

Clearly the Parks writers know that everyone wants to see Andy (Chris Pratt) shirtless for an extra dose of those Guardians of the Galaxy muscles. That’s not happening, but he will somehow lose his pants. Really, that’s even better.

It’s not clear what causes it but Tom (Aziz Ansari) is shedding some serious waterworks and goes to Ben (Adam Scott) for consolation. Fingers crossed it’s some good news for Tom’s Bistro.

Ron’s (Offerman) ex-wife Tammy II (Megan Mullally) has been on the confirmed guest star list for a while, but the preview shows her back in horrible action and stirring up trouble.

Ron may be finally immune to Tammy’s charms, but Councilman Jamm (Jon Glaser) is apparently not. It takes some serious Pavlovian training to snap him out of that love trance.

5) Ben looks great in a tux

Again, don’t know why Ben is in a tux, but let’s just be grateful he’s in it. The accountant cleans up really nice.

6) Leslie has a new nemesis

Ben isn’t allowed to say his name because it will fill Leslie (Poehler) with rage, but she confirms whoever he is is a “stupid garbage head doo-doo face.” Don’t worry, she’s going to be perfectly civil though.

Jamm is going to feel that double-hitter in the morning, but hopefully it’s enough to cure him of his Tammy disorder.