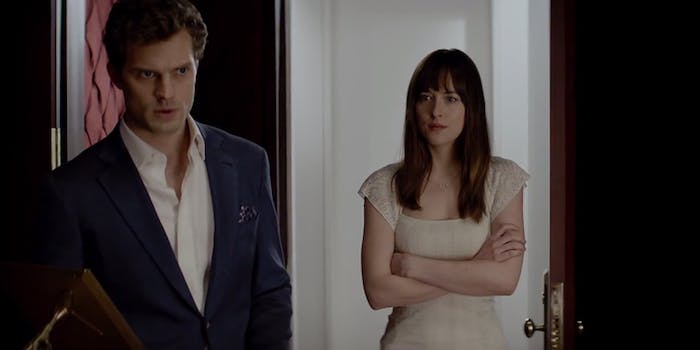 The first ‘Fifty Shades of Grey’ trailer has arrived

It's the first glimpse of the movie for fans.

After months of waiting—and a backlash from fans who were left unsatisfied by the casting of Charlie Hunnam (who soon left the project)— fans finally have their first look at the movie adaptation of Fifty Shades of Grey.

While Beyoncé previewed it on Instagram earlier this week, the first full trailer debuted on Today, a fitting place to target its core audience, who pushed the E.L. James novel to the top of the bestseller charts and will likely see the movie.

Starring Jamie Dornan and Dakota Johnson, the trailer is rather tame (mostly SFW) compared to the content within the book, although it does tease plenty of sex scenes between the two characters and Christian Grey’s Red Room of Pain. It’s paired off with a haunting new rendition of Beyoncé’s “Crazy In Love,” which manages to intensify things even more than the visuals already have.

Fifty Shades of Grey arrives in theaters on Feb. 13, 2015, just in time for Valentine’s Day.

Photo via Fifty Shades of Grey/YouTube