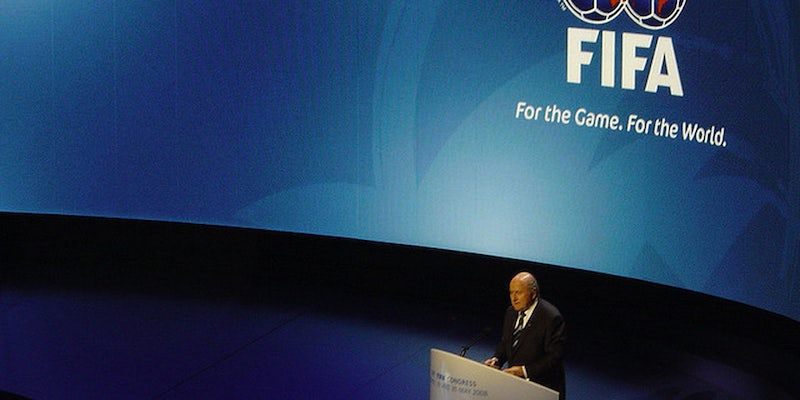 Much of the world now rejoices (at least on Twitter).

In stunning news, FIFA president Sepp Blatter, who was reelected to his fifth term just last week and who said he was now the president of everybody, has resigned from his office.

Blatter’s resignation comes in the wake of a widespread FIFA corruption scandal that led to an international police raid at a Swiss hotel last week.

“What counts most to me is the institution of FIFA and football around the world,” Blatter said Tuesday. “Thank you for your kind attention.”

Blatter has led the international soccer organization since 1998 and, despite continued allegations of corruption. That obviously has changed in the past week, and even though the U.S. Department of Justice didn’t appear to be targeting Blatter in its investigation, that doesn’t necessarily mean he’s safe from this controversy.

Tuesday’s news must have made made John Oliver’s dreams come true.

And now we wait for Oliver to drink all the Budweiser.

.@iamjohnoliver drinking a Bud Light Lime while eating McDonalds after the resignation of FIFA's Blatter is going to be my moon landing.

Oliver, of course, wasn’t the only one on Twitter who was relieved ecstatic with Tuesday’s news.

Sepp Blatter should take a job at JPMorgan Chase, where DoJ won't bother him.

Blatter gone just in time for Women's World Cup…thus marking the greatest good he has ever done for women's soccer.

It's like the end of "The Truman Show" https://t.co/3RV4LtJsMS

Congratulations to Billie Joe Armstrong of Green Day, who famously sang "Wake me up when Sepp's tenure ends."

So, who will be the one to succeed Blatter and who will be in charge of (hopefully) cleaning up FIFA’s corruption? This is one strong possibility.

DEVELOPING: The first candidate to announce his run for FIFA’s presidency is Switzerland’s Jepp Slatter. https://t.co/kcI0XOMSKd

Blatter is not out of the picture yet, however. He said he plans to announce a special session, known as an extraordinary FIFIA congress, to elect a new president “as soon as possible.”