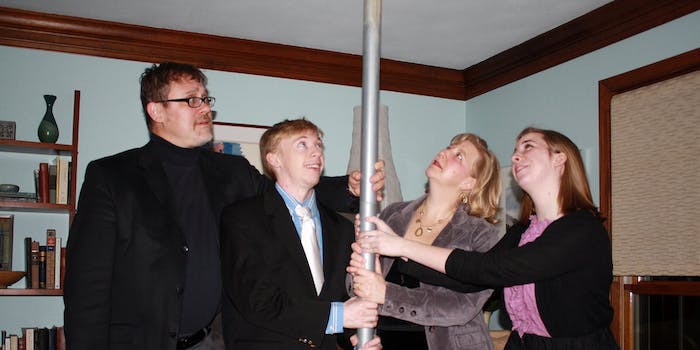 See how "the rest of us" mark each holiday season.

Since airing as a subplot on the 1997 Seinfeld episode “The Strike,” the celebration of Festivus has returned, popular as ever, each holiday season. In the years since Seinfeld’s finale in 1998, its strong presence in syndication introduced more and more people to Frank Costanza’s bizarre protest against Christmas commercialization and, as a result, many folks adopted its unique practices.

Here are some of the best ways Festivus’s various traits, from erecting the traditional Festivus Pole to even the “feats of strength,” have been carried out by everyday folks and celebrities alike—and preserved forever on YouTube.

The Festivus pole is Festivus’s answer to the Christmas tree: a decoration-free aluminum pole. According to Frank Costanza, aluminum is key since it has a “very high strength-to-weight ratio” and, also, he finds “tinsel distracting.”

In 2013, not only was a 6-foot-tall Festivus pole erected from leftover cans of Pabst Blue Ribbon beer…

…but it was also erected alongside several other holiday shrines in the rotunda of the Florida Capitol Building in Tallahassee.

If you’re tired of singing “O Christmas Tree,” try out a few verses of “O Festivus Pole.” YouTube user hyrax was gracious enough to provide us with a rendition of the original tune that was likely created once they had enough material for the PBR pole, if you get my drift.

Perhaps the most popular of the Festivus traditions, the airing of grievances is celebrated by letting everyone know how they have let people down in the past year. In Seinfeld, Frank Costanza exemplifies this by screaming “I got a lot of problems with you people!” to everyone at his dinner table, including those he had never before met. He then insults George’s boss to his face.

In a truly terrific YouTube example of this, we are treated to an airing of grievances by celebrity chef and television host Anthony Bourdain.

In another video, Dale, co-host of the LGBT YouTube series Flaming Freedom, directs his list of grievances toward his co-host Neil.

The feats of strength marks the close of Festivus; the holiday cannot end until the male head of the household is pinned. It only makes sense that this would follow the airing of grievances; after basically being roasted for several straight minutes, you would want nothing more than to pummel someone.

The Bourdain family really seems to be into Festivus. In this clip, Ottavia Bourdain dislocates the shoulder of Big Gay Ice Cream Truck cofounder Douglas Quint.

A much more informal feats of strength matchup takes place in a random living room between two friends of YouTube user robsterh99.

While the number of Festivus songs may not match the number of Christmas tunes out there, they nevertheless exist. And, unlike traditional holiday fare, true passion goes into anything considered a “Festivus song.”

And if you’re looking for one more reason to celebrate, there’s this Festivus carol straight from Seinfeld the Musical: A Broadway Show About Nothing.

Finally, here is a 2010 CNN interview with Jerry Stiller, who played Frank Costanza throughout Seinfeld’s nine-season run. He discusses the legacy of his character’s holiday and how it has crossed over into the mainstream—even venturing into the political arena.