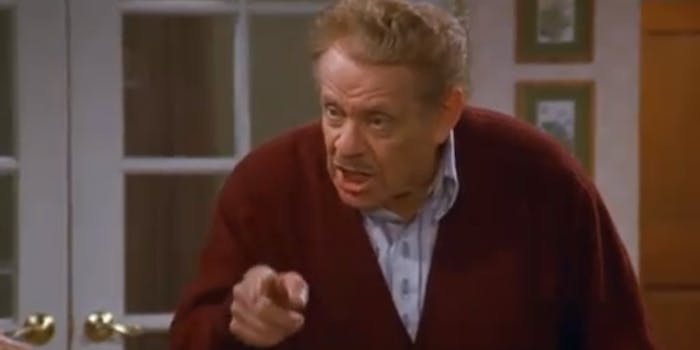 The complete guide to Festivus, the holiday for the rest of us

Get ready to air your grievances and gather 'round the aluminum pole. The non-secular holiday Festivus, made famous on the Seinfeld episode “The Strike,” is coming.

It’s late December. All across the country, people will sit down to a warm meal, look up at the family members and friends that surround them—and tell them how disappointing they’ve been in the past year.

That’s right. It’s time for Festivus, the holiday for the rest of us.

The non-secular holiday Festivus became common knowledge in late 1997, thanks to the Seinfeld episode “The Strike.” Growing up, George Costanza (Jason Alexander) never celebrated Christmas or Hanukkah. Instead, he reluctantly observed “Festivus,” a holiday created by his father Frank (Jerry Stiller) to rebel against the commercialism of the season. The observance, which was far from anything that could be considered celebratory, included such traditions as the “Feats of Strength” and an aluminum pole in place of a tree.

While Seinfeld may have ended, Festivus did not. Its unique aspects and overall blunt disregard for the commercialization of Christmas kept it alive. The Daily Dot compiled a list of how you can get the most out of your own Festivus celebration—every Dec. 23.

Obviously, any Festivus celebration should start with an understanding of its origin story. While traditional holidays can be traced back to ancient cultural rituals or historical events, the story of Festivus has its roots in the NBC “Must-See Thursday” lineup.

The Seinfeld episode “The Strike” first aired on Dec. 18, 1997, and has lived on since then through heavy TV syndication, Netflix, and DVD sales of the program’s ninth season. YouTube user snuhr chiseled down the episode to only the “Festivus” aspects in the video “George Costanza—Festivus,” which has more than 200,000 views.

The video reveals Frank Costanza’s reasons for creating the holiday, its observance date of Dec. 23, and practices of its various traditions.

Additionally, in his book Festivus: The Holiday for the Rest of Us, author Allan Salkin explores the holiday in more detail. The book includes a study of Festivus’s true origins in the household of Dan O’Keefe, whose son, Daniel, went on to become the Seinfeld writer who immortalized it in “The Strike.”

A Festivus without its aluminum pole is like Christmas without a pine tree or Valentine’s Day without overpriced chocolate.

Frank Costanza selected a bare metallic pole to symbolize Festivus’s refusal to buy into holiday commercialism (and also because he “finds tinsel distracting”). The pole must be made of aluminum, as it has a “very high strength-to-weight ratio.”

The site Festivus Poles sells the holiday’s staple, offering participants the option of the traditional 6-foot model or a smaller, 2-foot-8-inch table model.

The Human Fund: Money for People

In “The Strike,” George Costanza dodges his company’s tradition of expensive gift-giving by making donations to “The Human Fund” in each of his coworkers’ names. Needless to say, “The Human Fund,” whose charitable slogan is “Money for People,” does not exist. When his boss discovers the charity’s non-existence, George blames his tendency to give “fake Christmas gifts” on the fact that he celebrates Festivus instead of Christmas.

No Seinfeld-loving philanthropists have set up an actual “Human Fund” charity since the episode’s 1997 airdate, but you shouldn’t let that stop you from giving out your own “fake gifts.” The site webpageaboutnothing.com features a form that, at no cost to you, will allow you to create your very own “Human Fund” certificates.

If you feel that your recipient is not deserving of such attention, the website Festivus Web provides more generic cards for download.

The “airing of grievances” is one of Festivus’s most popular aspects. During the practice, you tell everyone in your company how they have disappointed you in the past year. In “The Strike,” Frank Costanza exemplifies this by telling his son’s boss that his company “stinks” before losing his train of thought.

Today, thanks to the Internet, more people than ever can hear about your gripes.

Festivusbook.com contains a form where users can submit their own grievances or read those created by others. A paper form can also be printed out and used thanks to Festivus.biz.

On Twitter, @SeinfeldTV, the program’s official Twitter feed, asks users to share their grievances. Additionally, @festivusweb, which is not affiliated with the show, will retweet the best grievances marked with the hashtag #airingofgrievances.

Unlike the massive turkey that serves as a centerpiece every Thanksgiving, the food choices at traditional Festivus dinners are far more unremarkable.

According to Festivus Web, the Costanzas served their Festivus guests a dish smothered in red sauce, narrowing it down to either spaghetti or meat loaf. The site suggests a list of foods featured on “The Strike” (such as bagels or subs), as well as other episodes of Seinfeld, as possible Festivus dinner items.

The site Festivus argues in favor of spaghetti, but stresses that the Festivus dinner can be anything that “has never worn feathers.”

In “The Strike,” Frank Costanza claims that Festivus does not end until the male head of the household is pinned to the ground. This is done through a tradition known as the Feats of Strength.

While wrestling is the preferred method to carry out the Feats of Strength, Festivus Web provides a list of various alternatives. These include arm wrestling, a staring contest, and even beer pong.

On Festivus.biz, the head of the household may print out a Feats of Strength challenge card if he wishes to approach the tradition a tad more formally.