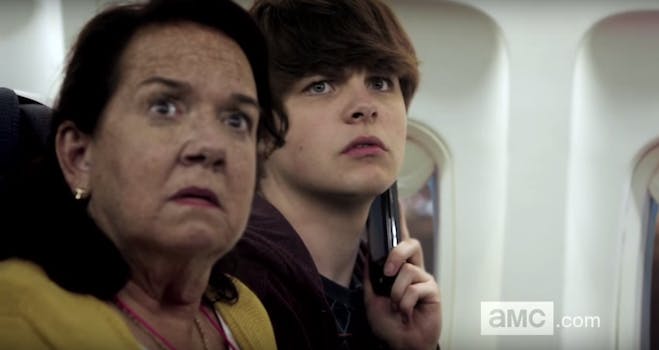 ‘Walking Dead’ webseries ‘Flight 462’ takes off on an ominous note

Flying is nerve-wracking enough without a looming zombie outbreak.

The zombie menace might not be a full-scale apocalypse in Fear the Walking Dead just yet, but there’s still enough of a threat to fuel a nightmare scenario: What happens when there’s an outbreak in an enclosed space like a plane?

That’s the question that confronts us in Flight 462, a 16-part webseries that will air with The Walking Dead once it returns to TV. Until then, AMC is occupied by introducing us to the characters. The casualty count is sure to be high at such a high altitude, but at least one of the passengers will survive to join the cast of Fear the Walking Dead.

This could easily be the first episode for a non-zombie series, but the hints of something darker are still there. Along with the usual preflight jitters are screams that a teenager’s mother says are “just the neighbors” and reports that flights are being grounded.

Turbulence is nothing compared to what these characters are about to face.