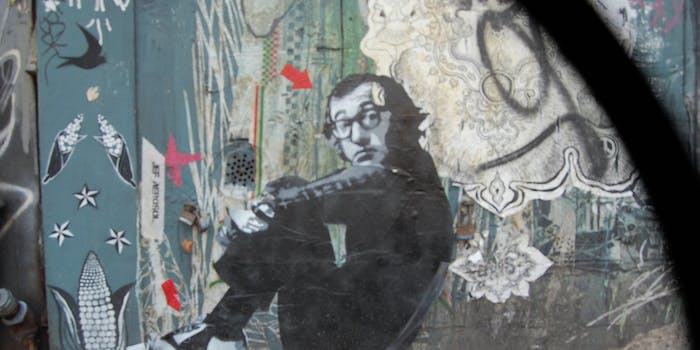 "Missed the Woody Allen tribute - did they put the part where a woman publicly confirmed he molested her?..."

In the wake of last night’s 71st Golden Globes ceremony honoring Woody Allen, Mia Farrow and her son are speaking out to remind everyone that while he may be one of Hollywood’s idols, the acclaimed director also has a dark side few people like to remember.

Mia Farrow pointedly reacted to the segment of the awards show last night by noting on Twitter that she was changing the channel. It was a stilted way of calling attention to a part of Allen’s history the Globes chose to ignore: his alleged abuse of Mia Farrow’s 7-year-old daughter, Dylan.

Her son, Ronan Farrow, a noted journalist and open critic of Allen, was less circumspect:

Missed the Woody Allen tribute – did they put the part where a woman publicly confirmed he molested her at age 7 before or after Annie Hall?

This morning, Mia took to Twitter again to link to a recent Vanity Fair article about Allen’s alleged abuse of her daughter, stopping just short of labeling him a pedophile. She also lashed out at the Golden Globes for honoring him:

A woman has publicly detailed Woody Allen’s molestation of her at age 7. GoldenGlobe tribute showed contempt for her & all abuse survivors

Is he a pedophile ? Read this VanityFair article and make up your own mind. http://t.co/k2nyrMpjAt

Mia’s daughter Dylan spoke to Vanity Fair in October about the family’s long-held allegations that Allen targeted and abused her for years. When Vanity Fair first delved into Dylan’s story in 1992, she was only beginning second grade, but already she would allegedly go to great lengths to escape Allen. According to the story, she locked herself in the bathroom, feigned headaches, and even pretended to be an animal. Allen was allegedly in therapy for his behaviors towards the girl. Although there wasn’t enough evidence to bring Allen to trial, a judge roundly denied Allen’s request for visitation rights to Dylan in 1993, noting Allen’s “serious parental inadequacies.”

Two decades have passed, but Dylan’s memory of the events remains clear—as does her “fear” of Allen.

“I remember what I was wearing and what I wasn’t wearing,” she told Vanity Fair’s Maureen Orth.

As for Ronan, known in his childhood as Satchel, Allen was given supervised visitation rights, but they seem to have left him with no affection. He reportedly never spoke to Allen again, and, on Father’s Day two years ago, he left no doubt about his feelings:

Happy father’s day — or as they call it in my family, happy brother-in-law’s day.

Ronan was referring to the “scandal” that destroyed Allen and Farrow’s 10-year-relationship. In 1992, Farrow discovered that the then-56-year-old Allen had been having an affair with Farrow’s 21-year-old adopted daughter, Soon-Yi Previn. Allen and Previn have been married since 1997. And although Previn, adopted by Farrow and classical pianist Andre Previn, asserted at the time that Allen hadn’t been a father figure to her, Ronan clearly feels differently.

It’s hard to miss that by extension the Farrow family’s tweets indict not just the Golden Globes but Hollywood itself. While the industry is not exactly known for boldly denouncing famous directors accused of sexual abuse, there’s an element of autobiography in Allen’s films—which frequently feature an older man falling in love with a much younger woman—that undoubtedly makes the Farrows’ allegations something few people want to think about too closely.

Fortunately, the family has all awards season long to remind the public about the parts of Allen’s storied career they’d rather not remember.